Among the many, many talking points coming of out the Bellator 180/Bellator NYC show at New York’s Madison Square Garden last night was the announcement that Roy Nelson, known to UFC and MMA fans for years simply as Big Country, would be making his promotional debut in September in the co-main event of Bellator 183.

The promotion announced the news during the Bellator 180 broadcast, and also had Nelson on hand in New York City to answer questions following the event.

Nelson (22–14) is 2-2 in his past four, and finished out his UFC contract with a loss to Alexander Volkov in April. At Bellator 183, he’ll be taking on Javy Ayala (10-5), who stunned MMA fans when he KO’d dangerous veteran Sergei Kharitonov at Bellator 163 in November.

Speaking to the press after Bellator NYC, Nelson was asked whether this was the kind of fight he wanted for his Bellator debut, and replied “As anybody knows, if you put a guy in front of me, I wanna fight… I don’t ask, and don’t go ‘hey I wanna fight that guy.’ When I actually try to ask for fights, I never get the fight I want, because a lot of people just turn down the fights. So I take whatever I can get, lick my chops, and put on a show for the fans.”

Big Country also noted that his scheduled opponent had knocked out Kharitonov in roughly fifteen seconds (the official time was 0:16). He appeared open to rematches with Cheick Kongo and Matt Mitrione, both of whom he defeated in the UFC, but specifically noted Fedor Emelianenko as someone he wanted to fight, regardless of the Russian’s loss Saturday.

“I was actually looking forward to Fedor, win or lose, just because I’d be the only man that actually beat Fedor, Cro-Cop, and Big Nog; those are the three legends of our sport as a heavyweight.”

Headlining the Bellator 183 card will be a lightweight bout between former UFC champ Benson Henderson (24–7), and Patricky Freire. Henderson has struggled since joining Bellator, losing title fights at both welterweight (to Andrey Koreshkov) and lightweight (to Michael Chandler). His lone Bellator MMA win came against Patricky Pitbull’s brother Patricio. He’ll now try and make it 2-0 against the Brazilian brothers.

For his part, Patricky Pitbull (17–8) was last seen scoring a knockout over Josh Thompson at Bellator 172 earlier this year. 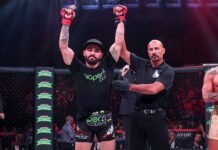 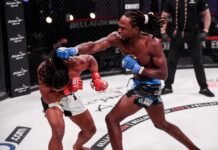