On the Spike TV broadcast of Bellator 180, prior to the promotion’s Bellator NYC PPV this Saturday, Brazilian featherweight Chinzo Machida returns to action. There, he’ll meet rising prospect, and teammate of Conor McGregor, James Gallagher.

It’s an interesting contrast between two very different fighters: a young, brash up-and-comer in Gallagher against the older, wiser, almost reserved Machida. It’s one of those MMA bouts in which nearly anything could happen, which makes it a compelling, must-watch fight.

We spoke to Machida (5-2) prior to the event, to get his take on his opponent, going full swing into MMA a little late in life, and a host of other topics. If there’s any one takeaway, it’s this: Chinzo Machida is focused and ready to give it his all Saturday at Bellator 180.

First up, however, was a discussion of Machida’s last outing. The come-from-behind KO of Jamar Ocampo at Bellator 170 was another highlight reel win for the elder Machida brother, and arguably (flying knees aside) one of the more memorable moments of his MMA career. So what did Machida take away from that fight?

“I learned a lot [from] that fight” Machida told Cageside Press. He explained that he felt “good to go” as far as his endurance went as well. “Even if the guy pressures me, I can overcome that situation.”

Pressure him is exactly what Ocampo did, and Machida’s corner was straightforward in their assessment of the action between rounds. That no doubt helped, and in the end, Machida was able to make “my opponent broke mentally. I learned a lot about that, and I’m ready for that situation again. I’m ready for top five.”

Before he gets to that top five opponent, however, there’s business with James Gallagher to attend to. So what about Gallagher has stood out to Machida? “I know he has very good standup, he has good takedowns, he has good guard work, but most of his victories are from jiu-jitsu” the fighter told us. “So I’m ready for any situation, I don’t want to predict the fight, but I trained very hard for any situation – standing, takedown defense, on the ground. I’m ready to fight, I’m ready to WAR!”

War might very well be what Machida gets, and it’s something the fans will no doubt love. James Gallagher previously said that he would take Machida down “and strangle him.” Chinzo, however, is not phased by the comments. “He can think about that, but it’s his opinion. My opinion is different. It’s not going to be easy to submit me. It’s not going to be easy to finish the fight. I’m ready for that, I trained very hard for that. Lets see [at Bellator 180] what’s going to happen.”

There’s no question that Machida has looked good of late, and his bout against Gallagher could turn out to be one of the best fights on the card. Yet the older brother of former UFC light heavyweight champion Lyoto Machida (who will be in Chinzo’s corner Saturday night) got started in MMA relatively late. Between 2005 and 2010, he took just three professional MMA bouts, going 1-2 over that stretch. Then in 2013, he returned to the sport, and has gone 4-0 since.

He has also picked up the pace since joining Bellator MMA. So does Machida have any regrets about not getting things going sooner?

“No, no because my focus was always creating the best form of Karate” the fighter explained. He then corrected himself. “Not created, but developed — Machida Karate — that proves effective in a real fight. My brother has already proven that.”

Of course, the Machidas happen to be some of the most legendary fighters in MMA utilizing a Karate base at this point. As Chinzo explained it,

I’m the guy in charge of the development of Machida style Karate. Last year, I decided to myself to prove that Karate is not for one person, like my brother, [but that] Machida Karate is a technique for everybody to train the right way, to train the good way. So in that sense, I started training and started to fight again in Bellator. As I had success in the first fight and the second fight… the guys from Bellator, they were so excited that they invited me to fight again at this very special event.

Success indeed. Machida has earned finishes in both of his Bellator fights to date, and now has a chance at another, over a top prospect on arguably the biggest stage possible. Not bad for a fighter who turned forty earlier this year.

On page two, we talk about Bellator’s plans for Machida, fighting at age forty, and appearing at Madison Square Garden. 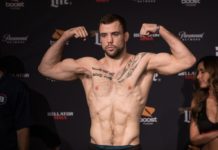 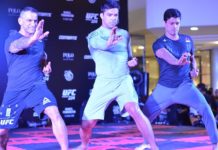 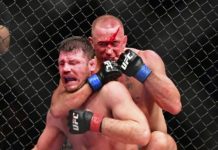