A few days back, One Pride MMA in Indonesia held its third event, Road to Glory. Among the fights on the card was a strawweight title fight between Brando Mamana and Adi Paryanto, the final fight in a tournament. Not leaving anything to the judges, Mamana landed this stunning spinning head kick KO of Paryanto all of fifteen seconds or so into the bout. Watch the full fight video above care of One Pride MMA.

You can check out One Pride MMA via their Facebook page by clicking here.

One Pride MMA 3: Road to Glory also featured a women’s strawweight and men’s welterweight title fights, among other bouts. Tournament winners picked up 25,000,000 Indonesian Rupiah for their efforts.

How does Mamana’s kick stack up against Tyson Nam’s? 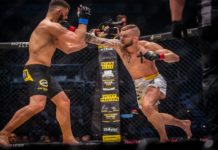