UFC 211 has come and gone. It lived up to its billing as the best card to date this year, a rarity in the MMA world. Though the numbers won’t be out for a while (and the UFC doesn’t release official PPV stats), it appeared to draw plenty of attention. All without any ridiculous beefs, trashing talking, or out-of-cage confrontations.

UFC 211 makes you wonder: do you really need a “beef” to sell a fight, or even a card? Was anyone, after the impressive fights put on by the likes of Chase Sherman and Rashad Coulter, or Frankie Edgar and Yair Rodriguez, or Joanna Jedrzejczyk and Jessica Andrade, left wondering “where’s the beef?”

You get brownie points if you remember that commercial, by the way.

Not every bout needs to be the bromance that was Stipe Miocic vs. Junior dos Santos (though there’s no doubt both won even more fans in the buildup to UFC 211). Yet the noticeable lack of trash talk at UFC 211 allowed fans to focus on the fights, not a circus sideshow. The sport shone through, which is perfect on a night where Joanna Jedrzejczyk beat her own record for significant strikes in a title fight.

It was a refreshing change. Because let’s be honest: there are very few decent trash talkers in MMA at this point. In fact, arguably there’s only two, those being Chael Sonnen and Conor McGregor. Yes, Jon Jones and Daniel Cormier went at it again at the UFC Summer Kickoff press conference on Friday, but they barely count as trash talking at this point. They’re more like a bickering married couple who keep putting off an inevitable divorce.

Back to the point of all this: the noticeable lack of hostility in the buildup to UFC 211 was remarkable. It also had an added benefit: none of the fights felt like they failed to live up to some sort of unattainable, lofty expectation. You simply went into the card just hoping for good, fun fights, and for the most part, that’s exactly what fans got (Branch vs. Jotko aside).

Maybe the UFC could take note of this. Because while Michael Chiesa and Kevin Lee got people talking Friday, did anyone think it was anything short of ridiculous? UFC fighters are, after all, professional athletes. There’s no beef needed to sell a fight between the best of the best, in all but the rarest of cases. UFC 211 taught us that, at least for those who had forgotten it. 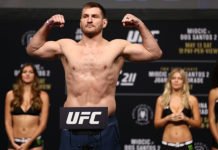 UFC 211: The Card We Needed Ahead of a Fight-Filled Summer 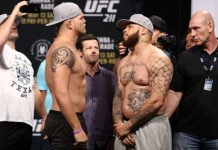