Some of the most interesting stories in MMA tend to be origin stories, and this one is no different. A fight with a family member has led Abdul Kamara to become a successful MMA prospect on the brink of something big.

Kamara, 31, is the latest bantamweight killer from The MMA Lab, located in Glendale, Arizona. The gym has several bantamweights in the UFC, including familiar names like Sean O’Malley, Mario Bautista, Casey Kenney, and Kyler Phillips. They also have upcoming prospects likely headed to the UFC with a couple more wins — like Marcus McGee and Kamara.

Fighting was never in the cards for Abdul ‘Scratch’ Kamara. He was a track star from a young age, which led him to pursuing the sport in college. However, like a lot of college athletes, there comes a time when you have to look at yourself in the mirror and answer that nagging question: “is this going to be my career?”

Track wasn’t the answer for Kamara.

“After college, I realized, man, these kids are really freaking fast. Like I’m average in the track world, if I’m being honest,” Kamara told Cageside Press recently during an exclusive interview. “I realized that I wasn’t gonna be able to qualify for the Olympics, and I don’t like to be average. So I was like, ‘man, I gotta go find a different sport that I can try to be great in.’

Little did he know mixed martial arts was going to be that sport.

“Me and my little brother, I had a party at my house this one time, and he was trying to drink in my house. I don’t drink alcohol. I’ve never tried alcohol. So I told him, he can’t drink at my house,” Kamara said. “So he got mad at me, and he was an amateur MMA fighter at that time. So when I told him he couldn’t drink, he kind of got very mad, and he took a swing at me!

“I slipped his punch, and I dropped him with the hook. And then I told him, anything that you can do, I can do better. The following week, I joined a gym, and my journey into fighting began.”

Kamara trained for two weeks and then took his first amateur fight, which he won. It was after that fight he decided he was a fighter.

The 31-year-old fighter holds a 5-1 professional record, with three finishes. Most recently, he competed in Jorge Masvidal’s new promotion, iKON FC, where he defeated a fellow rising prospect in Jose Torres on ten days’ notice via unanimous decision.

Kamara returns to action on February 5 at Fury FC 74. He revealed that he has signed a multi-fight deal with the Texas-based promotion and believes his rise through the promotion will lead to him getting the call to the UFC in 2024.

“When I enter the UFC next year, it’s gonna be one of those moments where it’s like, ‘man, we made it this far,'” Kamara said. “I’ve beat all odds because nobody expected me to be this far because I wasn’t born to be a fighter. Everybody counted me out. I stutter, and everybody thought I was dumb, but, you know, we keep pushing. And every day is a battle.”

“I want to be the first fighter from my country of Sierra Leone to be in the UFC. I want to make history now. I want to be the first person in my family to be a millionaire. I’m gonna try to do that. I got two kids that I’m trying to be an example for— to never quit on your dream, no matter what anybody tells you. I work 40 hours plus every week, and I go to practice two or three times a day, just trying to chase my dream to show my two kids it is possible. And I’m going to do it.” 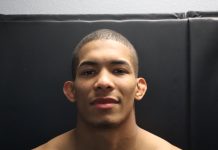