The UFC will continue to expand its road presence in 2023, with the latest destination to be announced being San Antonio.

The octagon will return to Texas city on March 25 for a Fight Night event, with the promotion revealing the news Thursday as part of a video package aired during the UFC 282 pre-fight press conference. The show is expected to be held at the AT&T Center.

No main event has been announced for the card, officially or otherwise. However, a women’s flyweight match-up beween Andrea “KGB” Lee and Maycee Barber was previously reported for the date, and confirmed by Cageside Press.

The UFC has made the trip to San Antonio twice before, and most recently visited in 2019. That card saw Leon Edwards defeat former lightweight champ Rafael dos Anjos in a welterweight affair, while names like Walt Harris, Dan Hooker, and Andrei Arlovski also featured.

UFC San Antonio joins a small but growing list of road shows the promotion has planned in 2023. In addition to the March 25 date, the promotion is expected to visit Rio de Janeiro, Brazil in January, and Perth, Australia the following month. Both cards will be numbered Pay-Per-View events. In March, in addition to the San Antonio date, UFC 286 will take place in London, England.

This year, the UFC got back on the road for a pair of dates in London, England, and made their debut in Paris, France, while also making stops in New York City, Orlando, Florida and Houston, Texas among other U.S. destinations. 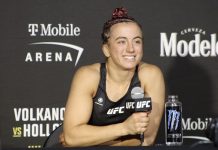