It’s been over seven months since Liz Carmouche claimed the Bellator MMA women’s flyweight championship, and this Friday at Bellator 289, she’ll run it back with the woman she captured the title from: Juliana Velasquez.

The immediate rematch comes after Brazil’s Velasquez protested the fourth-round stoppage that cost her the title in the pair’s first meeting. Following the loss, Velasquez appealed the outcome of the fight, only to be turned down by The Hawaii Department of Commerce and Consumer Affairs, who oversaw the Bellator 278 bout.

Velasquez had argued the stoppage, which saw Camouche on top, raining down damage, had come too soon.

It’s not a move Carmouche herself would have made had the shoe been on the other foot, she told Cageside Press in an exclusive interview recently.

“I can 100% tell you I would not have done the same. I’ve certainly been in positions where I walked out of the cage, and my opponent told me they had no idea why the decision was given to them,” Carmouche recalled. “Their entire coaching staff, every single person I walked across to, including the owner of the organization, told me they didn’t know why the fight went the way it did. And all I did was accept that I made a mistake I needed to fix.”

Those situations, rather than leading Carmouche to protest, instead prompted her to get back to training. “And so I was back into the gym trying to improve myself. I wasn’t throwing a temper tantrum, going to the organization and trying to appeal it. I made sure to fix myself.”

For Carmouche, it came as a huge surprise, “thinking that that was the demeanor of a champion,” to see Velasquez throwing a tantrum, she explained. Nor would she want to win or retain a title by having it turned over by the commission.

Ultimately, the reigning Bellator women’s flyweight champ feels the stoppage in her first fight with Velasquez was just.

“I don’t really think that it’s an early stoppage. To me, if you want it to not be stopped, you have to do something to advance the position, you have to defend yourself, none of which was happening,” Carmouche observed. “I watched, when I hit her with the second elbow, her just check out, just look up at the sky and stop doing anything. So if you kind of think about it, that’s ten unanswered elbows to an opponent who’s not doing anything. A lot of people would consider that a late stoppage, not an early stoppage.”

Things will hopefully be settled in fight number two, which serves as the co-main event of Bellator 289. After that, Carmouche told us that she has some really big goals for 2023, including convincing Bellator to launch a new women’s division.

“I really want to sit down and have a discussion with Bellator about advancing a 135 division for women. I think that with 125 and 145, it’s long overdue to add the 135 division, and my dream would be to hold the belt in two different weight classes,” Carmouche sated. “And also to be able to fight in Japan. So my three biggest things are to add a 135 division, successfully get the belt in 135 and hold it for two different weight divisions, and then successfully fight in Japan and close out the year there.”

Liz Carmouche defends her women’s flyweight championship against Juliana Velasquez in the co-main event of Bellator 289 this Friday, December 9, 2022 at the Mohegan Sun Arena in Uncasville, CT. 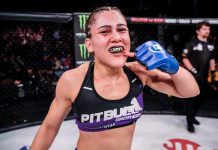 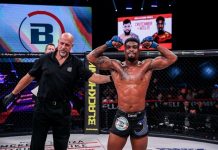 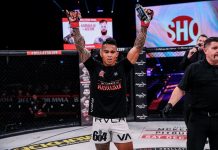