Orlando, FL – UFC welterweight Niko Price comes into UFC Orlando against Phil Rowe knowing he’ll more than likely get into an exciting scrap when they face off in the octagon inside Amway Center on Saturday night.

Price (15-5, 2NC) has been out for over a year. Last time out he defeated Alex Oliveira in October 2021. He comes into this fight looking for a scrap.

“You better just expect some fights because that’s what I do,” Price told the press on Wednesday.

Rowe has previously said that he’s not looking for a brawl, but a technical bout where he turns it into a bull-versus-matador type of fight.

“It’s cool. Everyone has a game plan until they get punched in the face,” Price said.

The last time Price followed a game plan for an entire fight?

“Great question. Couldn’t tell ya. I go in to fight people. I’m going in there to get dirty just get in your face, and start swinging these hands, knees, feet, everything. You want to grapple? I’m cool with that too. I’m good everything,” Price said.

Price’s prediction doesn’t include how or when, but one thing is true.

Watch the entire media day scrum with Niko Price above. He takes on Phil Rowe at UFC Orlando on Saturday night at Amway Center in Orlando, FL. 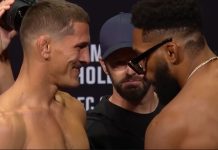