Orlando, FL – When UFC flyweight Matt Schnell steps into the octagon chances are he’ll be in an exciting fight and it may hold true once again when he faces Matheus Nicolau at UFC Orlando on Saturday night.

“Yeah I’m not committed to making it a barn burner, certainly not. I have noticed that, that’s kind of what happens with my fights, but I promise you I’m perfectly fine with just going out there and getting the W this Saturday night,” Schnell told the press on Wednesday.

“No promises that it’ll be a boring fight, but I can slow it down. We’ll see.”

For Schnell it’s not like his fights get that the point of brawls on purpose, but it sort of just happens as he said himself.

“I think it just comes from my mentality, and sometimes I try to meet fire with fire. That’s why I surround myself with good coaches and guys that try to make me think about the positions. Think about the things we’re doing and I think that, even though these fights are kind of getting going and being wild, if you break them down and look at them I am being technically sound,” Schnell said.

On Saturday his opponent is Nicolau who comes into the fight riding a three-fight win streak.

“I think it’s something we’ll have to parse out and let the fight develop because he’s shown multiple styles in the past. He comes from a good camp. He’s got competent coaches around him and I think they game plan based on who they’re fighting. It’ll be interesting to see how he goes about the fight with me,” he said.

“I’ve see him take it to guys, and I’ve seen him circle around and counter strike quite a bit too. It’ll be interesting to see how it goes. I’m ready for either.”

Schnell isn’t worried about what his opponent will do, but he’s ready for anything. 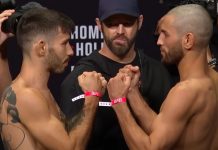