MMA Fighting was first to report the booking, with Dumas subsequently confirming the news on social media.

Prior to turning pro, Dumas had a lengthy amateur career including stops in Island Fights and CFFC. His Contender Series outing saw “The Reaper” submit Matěj Peňáz with a guillotine choke just 47 seconds into their fight.

Azaitar last competed in March of 2021, losing to Marc-Andre Barriault after succumbing to strikes in the third round at UFC 260.

Despite joining the promotion in 2018, Azaitar has fought for the UFC just twice. At least in part, his inactivity can be explained by a USADA suspension after “Captain Morocco” tested positive for banned substances (mainly tamoxifen) in a total of four drug tests starting in August of 2020. After providing evidence that the drug had been prescribed by a doctor, Azaitar saw his suspension reduced to just seven months.

The UFC’s March 11, 2022 event does not yet have a venue, location, or broadcast plan announced. The following match-ups have been reported for the Fight Night card: 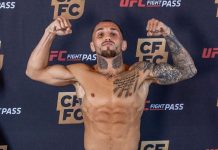