The first two fights of Marcelo Rojo’s young UFC career didn’t quite go as planned. This fact, Rojo suggests, was largely due to issues with not preparing properly and taking just any fight. Now under the tutelage of Glory MMA, he’s changed a lot of that around. He was more patient taking a fight and he’s rounded out his game.

Although he may have a better overall game than ever before, one thing hasn’t changed – Rojo is here to bang.

“I understand [why people want to wrestle me], but I am a showman. I like to give people what they deserve, what they paid for,” Rojo explained.

After having some opponents who tried to take that away from him early on, he now finds himself across from another with a wrestling background. Francis Marshall enters the fight known primarily for his grappling. That doesn’t faze Rojo though, because he feels nobody likes to strike with him anyways.

But even if Marshall is not out to bang with the Argentine, Rojo is ready to give the people what they came for and pick up that elusive first UFC victory.

His bout with Francis Marshall is part of the ESPN+ prelims of UFC Orlando this weekend.

You can hear the entire audio of this interview at 2:10. 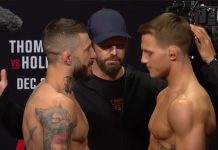