With the KSW 77 card already featuring the massive Mariusz Pudzianowski vs. Mamed Khalidov fight next month, the Polish promotion’s final event of 2022 has gotten even bigger.

On Wednesday, KSW officials announced via press release that two title fights had joined the fray. At light heavyweight, Ibragim Chuzhigaev (16-5) will attempt the first defense of his title against Croatian Ivan Erslan (12-1). Bantamweight champ Sebastian Przybysz (10-2), meanwhile, puts his belt on the line in the evening’s co-main event, opposite Jakub Wiklacz (13-3-1).

Erslan’s only loss, for his part, came against former champ Narkun in November 2020. He has not lost since, winning his last three bouts, two of which came under the KSW banner.

Sebastian Przybysz captured bantamweight gold against Antun Racic in 2021, and has defended the title twice since. He and Wiklacz have met twice before, with the pair’s career series tied at one win apiece. 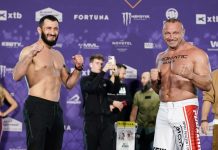 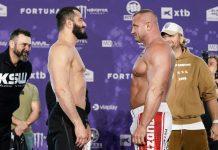