Israel Adesanya now has more to worry about than just his disappointing fifth round defeat at the hands of kickboxing rival Alex Pereira over the weekend.

Set to head home to his native New Zealand on Wednesday, Adesanya was instead arrested and hit with a misdemeanor criminal possession of a weapons charge, after being caught with brass knuckles while going through security at John F. Kennedy International Airport in New York City.

Per a report by TMZ, Adesanya was nabbed by the Port Authority Police Department nearby a TSA screening area just prior to 2PM on Wednesday.

Brass knuckles classified as a prohibited weapon in the state of New York, and not just the metal variety either. Plastic knunckles are also outlawed in the state; the charge laid for either is generally criminal possession of a weapon in the fourth degree.

Adesanya suffered his third defeat to Pereira at UFC 281 this past Saturday, after falling twice to the Brazilian in kickboxing. Most watching, including all three judges working the fight cageside, had “The Last Stylebender” ahead three rounds to one heading into the final five minutes.

Mere seconds was all it took, however, for Pereira to turn the tide, earning a TKO stoppage in the final frame to capture middleweight gold. UFC President Dana White remained open to the possibility of an immediate rematch following the event, though no timeline is in place.

It’s unclear whether Adesanya’s new legal hurdles will complicate matters, though as a Class A misdemeanor, criminal possession of a weapon in the fourth degree can result in jail time of up to a year, a $1,000 fine, or up to three years of probation. For those with no criminal history, being caught at JFK with a prohibited weapon of this type usually results in a Desk Appearance Ticket, though Adesanya’s status as a non-U.S. citizen could provide an extra hurdle.

Update, 5:30PM ET: Per a report by Ariel Helwani, Adesanya’s manager has released a statement claiming the fighter was unaware he was in possession of a weapon, as an unopened gift from a fan contained the item. He has since been released from custody. 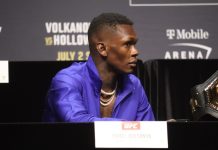