Haris Talundzic doesn’t want to feel the way he felt after LFA 141 ever again.

Mixed martial artists experience the highest of highs and lowest of lows. For Talundzic, losing his first LFA main event back in September sent him to a dark place again.

“You know, it’s funny how things work on Instagram. Instagram is kind of pretend life, so you don’t let [the people on] Instagram know; you kind of act like it’s not a big deal. Of course, you can’t let the fans know. But in real life man, it was dark— it was really bad,” Talundzic told Cageside Press in an exclusive interview recently. “From the moment I got back to my hotel room that night, it was just a short walk from the arena, and so I was on the phone with my parents, and they kept me from going over the edge. As did my coach, he spent at least an hour in the locker room after the fight, just trying to talk me from over the edge. You’re really emotional after a fight; whether it’s good or bad, you’re just really emotional. And they did a good job of keeping me, you know, just seeing the bigger picture.”

One those positive influences were gone, however, the darkness crept back in. “Once I got off the phone with my mom and coach was gone, and I was in a hotel room alone with my lady and my younger brother, it just got really dark, man. It kind of all settled in, and it was like that first loss as an amateur, all the same feelings and emotions,” Talundzic explained. The loss was “hard for me” to grasp and believe, he added.

“And then also it was like, I felt a lot of shame. Because in my mind, I’m a lot better than Chris [Brown], and to lose to him, multiple rounds. And then obviously losing the unanimous decision was like, it made me feel like an imposter, and I wasn’t who I thought I was. And until I rewatched the fight, I just felt really bad about myself. I didn’t know who I was, man. I feel like I thought I was one person, and then the results of that fight made me feel like a completely different person. And that just put me in a really dark spot for a few weeks until I was able to rewatch the fight and see the good things I did.”

Talundzic returns to action against Omoyele Gonzalez at LFA 147 this Friday and is looking to beat his opponent down.

“It’s going to be either a unanimous decision or a finish in the early rounds,” Talundzic said. “I think my opponent makes kind of, in my opinion, a lot of rookie mistakes that could lead to me finishing him. But if he’s fixed those things between now and his last fight, then you know, it will go three rounds possibly. I don’t foresee myself losing a single round. I’m gonna go in there with a sense of urgency. And what happened last night is not going to be repeated this night.”

Getting back in the win column will do a lot for Talundzic, but also, he has less pressure on himself because his undefeated record is gone.

“It’s crazy, the guys who go undefeated their whole careers, man, props to them because obviously the better you get, and the longer you stay undefeated, that means the tougher guys you’re fighting. Everything is bigger and harder. And for them to stay undefeated in those promotions, credit to them because that zero at the end of your record is sometimes more pressure than the opponent and more pressure than the venue, and it’s more pressure than anything else,” Talundzic said. “That zero is a battle against yourself. It’s not anybody else. It’s just you against yourself and losing the zero; you kind of feel like you lose a bit of yourself. You feel like you’re defending your life and it’s your identity and like being undefeated is who you are. And like, that’s why people like you. You start developing these weird ideologies, like, my life consists and revolves around being undefeated and losing.”

“All that pressure is gone now because losing showed me my life is a lot better than I thought it would be if I lost. Being undefeated isn’t…it’s not that big of a deal, man. It’s just cool.” 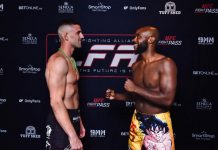 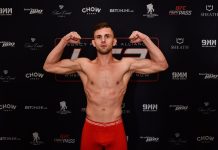