Bellator’s #5 ranked heavyweight Tyrell Fortune believes he’s not all that far away from winning a championship with the company — but after encountering more politics than expected in MMA, he’s letting Bellator worry about who he fights on his road to the title.

Returning at Bellator 288 this Friday against the unranked Daniel James, Fortune (12-2, 1NC) exclaimed during Wednesday’s media day that “I think this division is mine. Soon everybody will realize that, if they haven’t yet.”

“I think I just need a couple more fights to really prove that, and get that opportunity to take the belt,” Fortune added. “I think soon, my name should be with a ‘C’ next to it.”

Of course, the path to a title usually runs through ranked opponents. Fortune doesn’t have that here, and he didn’t have it in his last fight, against Rakim Cleveland, though not for lack of trying. Fortune was paired up both in a rematch with Tim Johnson, and against fellow top prospect Steve Mowry, both of whom are ranked. Both fights fell through, and Fortune wasn’t surprised when neither opponent’s name came up this time out.

“People play hide and seek with me, this whole time I’ve been in this game. It doesn’t surprise me at all if they keep ducking me and having situations or problems that come up,” Fortune told Cageside Press. “That’s something I focused on earlier [in my career], but that’s really not my focus anymore. I don’t care, if you wanna play games, then play games, if you want to fight than we can fight.”

So how does one navigate through a pro fighting career, with top tier opponents either unwilling or unable to sign on the dotted line? “Again, that was something I was focused on earlier and was very upset about how to do that,” replied Fortune. “And I thought it would be very simple, but this game has a lot more politics than I was aware of. So I choose not to rally focus on that anymore. I just really focus on my training and what I need to get done, and Bellator tries to make the fights happen when they can. That’s all I can really focus on, whoever signs the contract.” 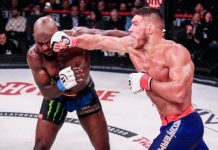