Mario Bautista put forth an outstanding performance against Benito Lopez, dominating his opponent on the ground en route to a first-round submission at the bell at UFC Vegas 64.

Mario Bautista looked to continue his recent winning streak, which included an impressive first round submission over Brian Kelleher, when he faced Benito Lopez at UFC Vegas 64. For Lopez this would be his first fight since a 2019 win over Vince Morales, so it was interesting to see if he would have ring rust or if he had honed his skills to a sharper edge in the last three years.

Benito Lopez came out aggressive from the very beginning, targeting kicks to Bautista’s legs and body. So Bautista responded with kicks of his own and the pair traded them for most of the first minute. Bautista, however, seemed to be quickly gaining the momentum and doing more damage. The long legs of Lopez were great for reaching far away, but they were similarly vulnerable to leg kicks.

Bautista soon began to open up with punches as well and landed a few combinations while Lopez was trapped with his back to the fence. The timing of Bautista to counter with kicks when Lopez kicked was effective in damaging Lopez’s leg early.

Two minutes in, Bautista landed a big combination of three hooks to the body of Lopez. Lopez survived but he was entirely defensive now. With his opponent’s back to the fence, Bautista switched from striking to a double-leg takedown, which he landed with no problem. Almost immediately, he passed to half guard. Bautista’s top pressure was smothering and he rained down hard elbows from time to time.

With one minute left in the round Bautista completed a pass to full mount and began to work to isolate an arm. He almost got bucked off but was able to come back and get in mount again after briefly losing it. Bautista worked on a straight armbar for a bit and then when he fell off of mount somewhat, he transitioned to an inverted triangle, and then went back to working on the arm. Finally, with six seconds left in the round, Mario Bautista peeled Lopez’s arm away, straightened it out, and forced his opponent to tap.

It was a complete performance, using all the main martial arts that you see in MMA: kickboxing, wrestling, and Brazilian Jiu-Jitsu to finish it off. Bautista gained his second straight dominant performance that ended in a first-round submission and seemed to be on a path toward the top fifteen of the deepest division in the UFC.

Mario Bautista def. Benito Lopez by Submission (Armbar) in Round 1 (4:54) 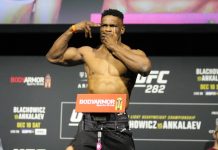