The lone newcomer on the UFC Vegas 62 card on Saturday, Brazil’s Lucas Alexander was welcomed to the octagon by countryman Joanderson Brito.

Alexander stepped in to replace Melsik Baghdasaryan, who dropped out of the fight late last month.

Brito was 1-1 under the UFC banner to start the night, and looking for his second straight victory since arriving by way of Dana White’s Contender Series in 2021.

The featherweight match-up did not last long.

Brito was aggressive right out the gate swinging looping left hands. Alexander was avoiding but slipped to the mat allowing Brito to get his back. Though Brito had the back standing he slammed Alexander down twice and jumped on the back standing again. Brito backpacked as Alexander fought the hands; very quickly Brito locked in the RNC. Alexander fell to his back and tapped right away.

Following the win, Joanderson Brito revealed that that very morning, he received a phone call saying he was going to be a father once again. He called called out a big name: Dan Ige. Brito is looking to fight Ige in Rio as part of UFC 283 in January.

He also promised to keep giving fans what they want. “You know what people want to see? They want to see hitting, and that’s what I bring!” 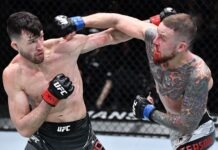