The UFC’s upcoming November 5 card has absorbed a heavy blow.

Movsar Evloev had been expected to face Bryce Mitchell in the Fight Night show’s main event. However, having suffered an injury in training, Evloev is off the card.

ESPN Deportes was first to report the news. The nature of Evloev’s injury has not been revealed.

Evloev, a former M-1 champ with a perfect 16-0 record in his professional career, is currently ranked #10 in the UFC’s official featherweight rankings. Mitchell, likewise undefeated at 15-0, sits at #9.

No replacement for Evloev has been announced, thought the promotion is reportedly seeking someone to step in. Failing that, the UFC has a couple of options, including welterweight faves in Neil Magny vs. Daniel Rodriguez, and strawweight contenders in Marina Rodriguez vs. Amanda Lemos.

The UFC’s November 5, 2022 event takes place at the Apex in Las Vegas, Nevada with the following bouts attached: 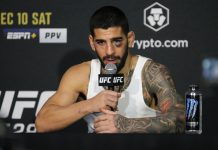 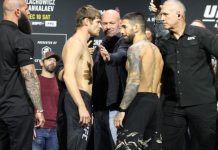