This Friday’s KSW 75 has seen a switch-up atop the card.

On Monday, promotion officials announced via press release that KSW light heavyweight champ Ibragim Chuzhigaev was unable to travel for the card, the result of changes in travel regulations regarding the Schengen Zone in Europe.

Turkey’s Chuzhigaev fights out of Grozny, Russia, and had been expected to defend his title against Ivan Erslan.

Stasiak competed for the UFC from 2015 to 2018, posting a record of 2-4 during that stretch. The Polish featherweight picked up wins over Filip Pejic and Gavey Grant, while falling to the likes of Pedro Munhoz and Brian “Boom” Kelleher.

His opponent, Ruchala, is undefeated through seven pro fights. That includes four straight under the KSW banner, where he debuted in 2020 with a submission win over Michal Domin.

KSW 75 takes place Friday, October 14, 2022 at the Amfiteatr Park Strzelecki in Nowy Sacz, Poland. The following fights are attached to the card: 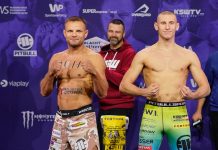 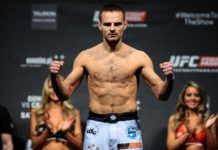