Yan Xiaonan overcame the jiu-jitsu threat posed by Mackenzie Dern at UFC Vegas 61, while Randy Brown moved past Francisco Trinaldo in the Fight Night card’s co-main event. With the card now behind us, here’s what could come next for some of the night’s big winners.

After a heart-stopping win over Mackenzie Dern on Saturday, Yan Xiaonan righted the ship from a two-fight losing streak and now looks to strike out towards a title shot once again.

There is no better way to earn such a shot than by beating a former champion and divisional GOAT like Rose Namajunas. Namajunas lost her title in a disappointing fight against Carla Esparza, who coincidentally beat Xiaonan to earn her own title shot, and if she wants to earn her belt back she needs to fight top contenders like Xiaonan. Both fighters are exceptional strikers who bring action to the octagon almost every time out. Marina Rodriguez would seem to be next for a title fight after the upcoming bout between the champion, Esparza, and Zhang Weili in November, but after that the division is wide open. Rose and Yan each can make a strong case for themselves by beating the other, and could even earn a fight of the night bonus in the process given their fighting styles.

Randy Brown got his fourth win in a row in the co-main event of UFC Vegas 61. After his fight he soon tweeted, “I’m not satisfied with that at all. I’m going to fight again this year.” That statement lines up neatly with Jake Matthews’ call for a ranked opponent this past week. Jake has been having trouble getting a fight with someone in the top fifteen, apparently, but sits on the edge of the rankings just like Brown. A fight between the two would be one to catch many fans’ eyes and the timelines match up as both seem to want to fight before the end of the year. Additionally, each fighter has won four of their last five and would be the logical next choice for a shot at the rankings despite a lot of competition for places.

Raoni Barcelos put himself back in the winner’s circle on Saturday by beating Trevin Jones in a comprehensive performance that showed why so many fans were so excited about him before his two fight losing streak. He still sits on the fringe of the rankings of one of the most stacked divisions in the sport’s history and so one of those other fringe contenders should be next.

Enter Cody Stamann. Despite losing three fights in a row not that long ago, Cody Stamann held a ranking before his losing streak and all of his losses have been against top tier competition. Stamann and Barcelos are both looking to stack a second win in a row on top of their most recent one and the winner has a real shot at a ranked opponent in the near future if they can win this fight. This fight would have a bit of everything as both men are supremely well-rounded, so it is easy to see why the promotion would look to book it.

Sodiq Yusuff was booked against Giga Chikadze before the Georgian was forced to withdraw, leaving Sodiq forced to take a debuting opponent in his fight on Saturday. Having done so, a fellow ranked opponent is on the cards and there is no good reason not to rebook the fight with Chikadze. That fight seems on paper to be an excellent striking-heavy matchup between two high level kickboxers. Fans will be in for a treat if the UFC decides to revisit that one.

After beating Vlacheslav Borshchev at UFC Vegas 61, Mike Davis has three wins in a row, even if it has taken three years to accrue those wins. Mike Davis is closer than ever before to facing a ranked opponent. Joel Alvarez has only lost to elite prospects Damir Ismagulov and Arman Tsarukyan, much like Mike Davis who has only ever lost to Sodiq Yusuff and Gilbert Burns. Additionally, fans always look forward to seeing each man when they appear on a card. A fight between the two of them would have fight of the night potential and give one athlete the chance to try for a ranked opponent in the near future. 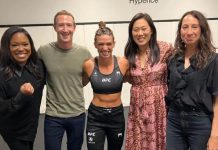 Whether He Rented the Apex or Not, Mark Zuckerberg’s Presence Kept Fans, Media Out of UFC Vegas 61