Fresh off a failed title bid against champ Angela Lee (also in action Friday, where she looked to claim a second title in the strawweight division), Fairtex was paired up with Malaysia’s Jihin Radzuan.

Both fighters entered the night with identical 8-2 records; Radzuan was winner of her last three.

There was plenty of action early as Stamp and Radzuan collided, quite literally. A quick flurry of an exchange led to Radzuan blasting in for a takedown; Fairtex showed some solid takedown defense in fighting it off, even as Radzuan stayed on her and tried to switch to a trip.

When they did go down, however, the move backfired on Radzuan, as Stamp nearly went over the top, then landed in mount. She tried to get busy, but Radzuan scrambled up and out, taking the back and landing a snap takedown to put Fairtex down — only for her to pop up with an apparent surge of energy.

The grappling battle continued however, with Radzuan again taking the grand prix winner down. This time, Radzuan worked at pulling Stamp’s legs out from under her as Fairtex sat upright against the fence. Fairtex answered by eventually bludgeoning Radzuan with elbows, before regaining her feet in the final 30 seconds of the round.

Round two found the pair trading leg kicks and combos up top, with Stamp’s having a bit more of a snap to them — but Radzuan was nevertheless effective in her own right. When she shot for a takedown, Fairtex sprawled and stuffed the attempt; moments later, Stamp connected with a right hand that led to a desperation shot by Radzuan. Fairtex then easily took the back, getting both hooks in. Moments later, Stamp was under the chin, but Radzuan fought hands and earned herself just enough space to stay alive.

Fairtex, however, would eat up clock in that dominant position, working on the rear-naked choke and peppering Radzuan with lefts. With a minute to go, Radzuan attempted to reverse, and while she eventually got on top, she had no time left in which to work.

Early in the third, Fairtex rocked Radzuan again, sending her to her back with a crushing elbow. Stamp got right on top, looking to drop ground n’ pound with Radzuan trying to tie her up and buy time. Fairtex was in half-guard, and Radzuan managed to survive for the time being. Radzuan even managed to regain full guard, pulling it up high after Fairtex pushed her to the fence.

After a good bit of grappling against the cage, Fairtex began dropping elbows — but Radzuan latched on with an arm-bar! Stamp gutted it out, then trapped a leg for a knee-bar attempt of her own! Radzuan somehow survived a very uncomfortable scene, and would finish the round on top — but ultimately lost an exciting, back-and-forth fight. 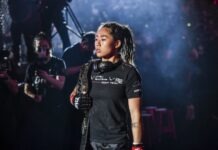 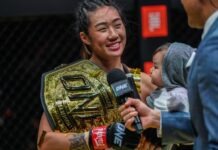