After over a year on the sidelines, Oumar Kane, perhaps better known as “Reug Reug,” returned to action at ONE 161 on Thursday in Singapore.

The Senegalese heavyweight had last competed in April of 2021, suffering the first loss of his MMA career when he was unable to continue following two rounds against Kirill Grishenko. A high-profile match-up with Marcus Buchecha had been booked earlier this year, only for Kane to pull out.

Instead of Brazil’s Buchecha, Kane instead returned opposite undefeated Russian Batradz Gazzaev at ONE 161.

It was a successful return for the heavyweight prospect, but Oumar Kane did face some adversity early.

Off the opening bell, it was Gazzaev shooting for a takedown, with Reug Reug defending then reversing his opponent against the fence. Gazzaev broke free, however, shot in again, but was stuffed, reversed, and lit up with several heavy shots from the massive Kane. Gazzaev would go in on a takedown again, landing it this time only for Kane to work back up. A second attempt saw Reug Reug warned for grabbing the fence; Gazzaev put a body lock in place, but struggled when trying to wrench Kane down.

Gazzaev however stayed on a single leg, but Reug Reug eventually escaped over the top, and the pair moved back to center. Kane fired his jab, but was warned by ref Herb Dean for having his fingers pointed forward. Moments later Kane launched a head kick that was blocked; Gazzaev would launch a left, but it was Reug Reug mixing things up, adding a leg kick and forcing the Russian to retreat.

Round two opened with a warning to Kane that he’d be penalized for any further fence grabs. After a wild exchange, Gazzaev would shoot for a takedown, but Reug Reug stuffed that, and dropped a number of hammer fists. Gazzaev refused to let go of the leg, but paid for it, as Kane moved to mount after his opponent turned to his back. Smashing ground n’ pound followed, and it wasn’t long before the ref waved things off!

Following the win, Kane said there was still much for him to showcase, and that he’d show his legs next time out. “You can give me whoever you want. All I want is to take the belt and bring it back to Senegal,” he replied when asked who he wanted next. 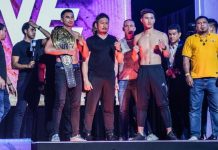 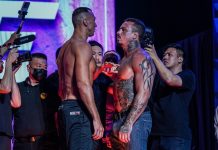 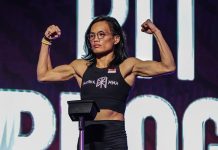