Las Vegas — Jack Jenkins’ coach pulled a fast one on him in regards to his DWCS appearance.

It has been a long two years for Australia’s Jenkins. Many people, including himself, thought the UFC would have called him in 2020, but they didn’t. It took another two years for him to get his shot at a UFC contract.

In 2020 at Eternal MMA 52, a few weeks before the world shut down, Jenkins won the Eternal featherweight championship via fourth-round submission. The UFC didn’t call. After sitting out an entire year, he would defend his title at Eternal 57 and defeat Jesse Medina via TKO. The UFC still didn’t call.

Jenkins would fight once more in 2021, capturing another title, this time the vacant Rogue MMA featherweight title. No UFC call. “Phar” would return to Eternal in March of this year and defend his title a third time. Again, he didn’t get an immediate call.

“Well, I think after my last fight, it left me thinking, is it my turn yet? I remember saying that a lot over the last two years,” Jenkins told Cageside Press in an exclusive interview recently. “With COVID and stuff, I realized it was hard. I think I would have been here a long time ago if not for COVID. I was really left thinking, like, is it my turn? Is it my turn? Is it my turn? But after the Costa fight- the last one I thought no, no, no, it’s my turn. Like I thought without a shadow of a doubt. And then when it didn’t come early on. I was like, What the fu*k? But that’s the way that the dice roll.”

“So I ended up going fu*k it; there’s nothing I can do about it. If I have to show them again. I’ll show them again. So I booked another fight. And then I think maybe that’s a bit of karma or whatever else, the universe talking to me. Once I booked that fight and locked it in it, Sean Shelby called. I’m beyond happy to get the opportunity, but I’ll be happier once I actually get my foot in the door.”

The fight that Jenkins was talking about was a now cancelled fight against Justin Van Heerden at Eternal MMA 70. “Phar” planned on defending his belt for a fourth time in order to get that UFC call.

“My coach asked me to come around to his house to watch our football team play because we both go root for the same team. So, we’re watching the game, and then at halftime, he says, ‘jump up, I’ll show you around the house.’ And he takes me into his lounge room, and he’s got like some fights on, and he’s like, ‘ah, what do you think of this guy?’ I was like, ‘yeah, he’s alright.’ And my coach goes, ‘ah, he just got signed to the Contender Series.’ I’m like, “Oh damn, what weight?’ And he told me he was a featherweight. I asked against who, and he went, ‘just some nobody.'”

“We finished watching his fight, and my coach told me it was the last featherweight for Contender Series. So I was like, ‘damn, I have no chance now’. And he was like, ‘well you’re not got no chance, because you’re gonna fight in Vegas on week 10.’ I was like f*ckkkk!'” 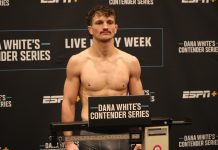 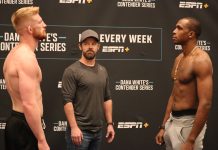 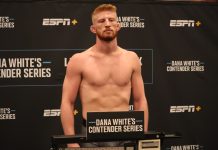