The main event for the UFC’s November 19, 2022 Fight Night event has been announced.

Derrick Lewis (26-10, 1NC) is set to face Serghei Spivac (15-3) in a five-round heavyweight affair atop the card, promotion officials revealed Saturday. The event is once again expected to be housed inside the UFC Apex in Las Vegas, Nevada.

With a combined 28 KOs, these two heavy hitters won't go all 5 rounds 👀@TheBeast_UFC vs Serghei Spivac is OFFICIAL for Nov 19! pic.twitter.com/rtTCGVttGE

The fight finds “The Black Beast” Lewis looking to bounce back from a quick, controversial stoppage loss at the hands of Alexander Romanov at UFC 277. While the fight ended by technical knockout just 55 seconds into the opening round, many watching, including UFC President Dana White, suggested the stoppage had been a little on the quick side.

The defeat was the second straight for Lewis, who was also knockout out by a Tai Tuivasa elbow in February 2022 at UFC 271.

Lewis has fought for both the UFC heavyweight championship and an interim title, but is just 1-3 across his last four contests.

Serghei Spivac is on a markedly different trajectory, having had his hand raised in his last two fights. Those victories, both coming by TKO, have come against notable names in Greg Hardy and Augusto Sakai. Spivac is 5-1 in his last six fights, after the Moldovan went 1-2 to start his UFC tenure. 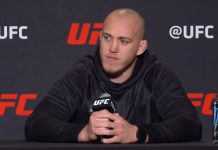