The Apex played host to its 15th event in 2022 this past Saturday, as two budding bantamweights near the top of the tree collided at UFC Vegas 60 to see who could etch their name further into the title conversation.

Let’s take a look at what could be next for the winners of on the night.

“The Sandman” got back into the win column after coming up short in his last two, and this time, he took the decision out of the hands of the judges. Early on in the fight, Sandhagen looked to utilise his grappling to nullify the threat of Song Yadong’s power, but it didn’t go Sandhagen’s way initially and out of three attempts, none paid off. After the brief grappling exchanges, the fight found itself back to the middle of the octagon, with Sandhagen becoming the more active striker out of the two, with Song looking to land one big shot to put the lights of Sandhagen out.

At the end of round two, Sandhagen opened up a cut above Song’s left eye that played a huge role in the outcome of this fight. Round three played out similarly to the prior two, with Song looking for the power shots, and Sandhagen striking with a lot of volume. In the main event rounds, Song found some success in the standing exchanges with Cory finishing the round with a gritty takedown. Going into what was the fifth round, two of the three judges had it tied 2-2, whereas Chris Lee had Sandhagen up three rounds to one. Before the beginning of round five, the doctor entered the octagon to check on the deep cut above Song’s left eye, subsequently deeming him unfit to continue with Herb Dean waving it off.

With the 135lb champion set to defend his title at the end of October, it will be interesting to see how the top of the division plays out. “Chito” Vera is coming off the back of an impressive KO win over the veteran, Cruz. Sandhagen vs Vera is a fight I’d personally love to see next.

Extremely deep cuts was a theme of the night. Within the first minute of his fight with Chidi Njokuani, the Brazilian was met with a knee through the middle that connected directly on the dome. After getting wobbled by Chidi and leaking red all over the octagon, Rodrigues landed back-to-back right crosses, dropping Njokuani.

Despite the brutal extent of Rodrigues’ cut, he didn’t let it play a big factor in the fight, and after a powerful judo throw a minute into the second round, he landed some extremely heavy ground-and-pound, scoring the TKO win. 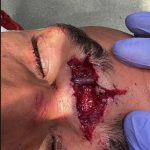 “Robocop” has now scored back-to-back impressive stoppages, with this one putting a halt to what could’ve been Njokuani’s five fight win streak. One fight I’d love to see if Silva beats Duraev is Rodrigues vs Silva, but we will have to see how the situation unfolds.  Rodrigues and Buckley were once upon a time scheduled to fight eachother during their LFA days, however, fans never got to see it. Why not now?

“Touchy” Fili edged his way through a split decision against Algeo, moving himself back into the win column.

All three judges deemed Fili to have won round one, with round two unanimously going Algeo’s way. Although stats don’t paint the true picture of a fight, if you were to look at the stats alone from this fight without watching, you’d assume Algeo did enough to pick up the win. Algeo out-landed Fili in all three rounds, however, Fili donned over four minutes of control time in their 15 minute encounter.

With the outstanding depth of the featherweight division, there are many truly mouthwatering match-ups littered throughout, however, there is one that stands out to me. Nate “The Train” Landwehr is coming off a war of his own against David Onama, and that’s one that jumps out to me.

Contender Series standout, Joe Pyfer, showed why there is an excitement around his name, scoring a round one victory in his promotional debut.

After his impressive KO over Ozzy Diaz on week one of the 2022 Contender Series, Pyfer came into this bout high on confidence, knowing that a dominant win here would give him the shine, and that extra momentum for his next outing.

Jacob Malkoun would be a fight I would like to see next for Pyfer, as two prospects collide.

After seeing three cancelled bouts since the end of 2021, Tanner Boser was finally matched up with Nascimento, after the Brazilian withdrew from their scheduled bout back in April.

Nascimento who has had his own string of misfortune recently too, put on a performance worthy of the decision win. The scorecards were slightly all over the place for this one though, as Doug Crosby had Boser winning the fight scoring him rounds one and two, whereas Junichiro Kamijo was of the opposite decision and scored Nascimento all three rounds. The man in the middle, Adalaide Byrd, scored the 29-year-old round one and three.

Throughout the 15 minutes, Nascimento scored himself three takedowns with a takedown percentage of 42%.

Nascimento may have earned himself a fight with a ranked opponent, and someone who will be looking to pick up a win after a disappointing loss in his last outing, is Alexandr Romanov.

“Fluffy” Hernandez made it three wins in a row with a third round submission win over Marc-Andre Barriault. Hernandez exhibited his skill as an all-around mixed martial artist during the fight, getting the better of the striking exchanges, and then also mixing in a dominant ground game.

The 28-year-old prospect landed 8 of 14 takedowns, boasting a percentage of 57%. Not only that, but he also donned a 65% significant strike percentage, showing he is a threat from all angles.

Polish middleweight, Michal Oleksiejczuk is someone I’d like to see Hernandez fight next, with both of them looking impressive in their respective outings. 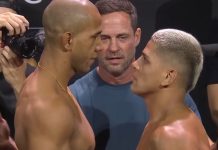 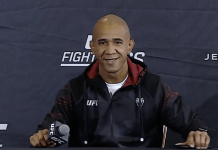