Santos (22-11) has signed with the PFL, and is expected to debut as part of the league’s 2023 regular season. ESPN, the PFL’s official broadcast partner, was first to report the news on Thursday.

In a statement provided to the outlet, PFL President Ray Sefo said that “We are very excited to bring in Thiago Santos to the PFL light heavyweight division. He is known throughout the MMA world as a guy who delivers exciting fights, and I’m looking forward to seeing his elite knockout power up close.”

Santos spent a full decade with the UFC, getting his start as a middleweight. He soon became known for his explosive finishes, and boasts 15 KO/TKO stoppages among his 22 wins. In 2018, he made the move up to light heavyweight, winning three straight to earn a shot at then-champ Jon Jones.

The Brazilian would push Jones to the limit, but suffered severe knee injuries in what was ultimately a losing effort. He has just a single victory since, a 2021 decision win over Johnny Walker.

Most recently, Santos was finished by upstart Jamahal Hill at UFC Vegas 59 in August.

Santos’ exit from the UFC was an amicable one, with the fighter requesting and being granted his release.

“It was an amicable separation with the UFC,” the fighter’s manager, Alex Davis, told ESPN. “Thiago is very grateful for everything the UFC did for him, and he’s very grateful toward the PFL for signing with him. He’s looking forward to winning a million dollars.” 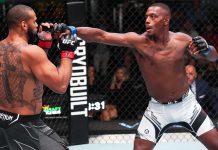