“I’m very happy to win. The first two fights were not lucky in my favor so I’m very happy to get to the winning column. Hopefully we’ll bring great fights and continue to win,” Kopylov told Cageside Press among other media through a translator at his post-fight scrum.

“The last two were losses so it was very important for me to to win this one. I did everything to get the win and I knew that no matter what I had to walk away in the winning column.”

Kopylov finished the fight in the third round, but Di Chirico being one of the toughest fighters on the roster, he had his hands full for the first two rounds.

“The first round was going in my favor. I thought that I was doing a good job. In the second round kind of went sideways a little bit. I’m not sure what was happening, but it didn’t go my way,” Kopylov said.

In between rounds his corner stepped in to get him back on track.

Towards the end of the fight Di Chirico seemed to tire out and stopped putting his hands up. Kopylov took notice and attacked.

“To tell you the truth I kept on throwing single punches and they did hurt him, but he kept on recovering. So my corner kept saying ‘Keep on working combinations’ and the first time I threw out a combination you saw what happened,” he said.

So what should be next for Kopylov after he made a statement at UFC Paris?

“I don’t have an opponent in mind yet, but if we’re talking Abu Dhabi, October 22nd. I’d be happy to be ready for that.”

Watch the entire post-fight scrum with Roman Kopylov above. 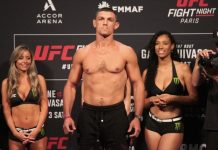