This Saturday’s UFC Paris marks the first time in the promotion’s history that the UFC has visited France, with MMA only being legalized in the country in 2020. The card is headlined by France’s own Ciryl Gane taking on Tai Tuivasa in a pivotal heavyweight fight. There are also altogether five fighters from France on the card and seven fighters making their UFC debut. One of those debuts is Ailin Perez who was expected to fight Zarah Fairn but is now facing Stephanie Egger in a featherweight fight.

How will Perez fare in the UFC:

Perez is mainly someone that’s wanting the fight grounded at all times. On the feet, she does throw good output and seems to have some power behind what she throws. She even holds a sick head-kick knockout. But while she brings some power and volume to the cage she lacks in technique, footwork, and defense. Perez is plodding with her movement and is just there to be hit. There is a reason she brings a relentless ground game plan.

Perez is a problem when she gets the takedown but I’m not sure her wrestling matches her ground game. It’s been takedowns mainly from body locks and just getting the takedowns from power in general. She relies on getting takedowns more with her strength than her technique. It will work to a certain degree though and strength can take her a decent way at bantamweight (though her debut comes at 145lbs).

When Perez is able to get the takedowns on top is where her best work comes from. I will say she can be a little sloppy in position but that’s when she’s going after submissions. The ground and pound is by far her best weapon. Perez actively throws grounded elbows and punches that open up the path to transition into dominant positions. In those dominant positions, her ground and pound is relentless and she will attempt subs here and there.

With Perez women’s bantamweight is shallow (and featherweight practically non-existent) so it’s a fine signing. She has some skills but lack of technique will only take her so far. I definitely can see her getting a few wins in the UFC but I don’t ever see a ranked number beside her name.

Newcomer @AiluPerezUFC making a statement ahead of her debut.

How she matches up with Egger:

Perez had a more favorable match-up against Zarah Fairn but Egger is still a winnable fighter. Egger is kind of similar to Perez as Egger is limited on the feet and relies on getting takedowns and top position. Like Perez, Egger doesn’t have great wrestling but relies on power to get the fight down. I think if Perez wanted to stick around on the feet a little bit I believe she would win those exchanges. It will probably come down to who is the stronger woman and who will get the top position. I like the takedowns of Perez a little more and it seems to me Perez has the superior gas tank. I like Perez but I’m not confident. 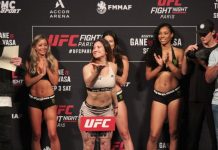