The UFC returns to San Diego, California this Saturday night. UFC San Diego is headlined by an exciting fight between Dominick Cruz and Marlon Vera. At strawweight, Yazmin Jauregui was going to be welcomed to the UFC by Istela Nunes, but Nunes pulled out due to injury. Now filling in on that spot is another prospect making her debut in Iasmin Lucindo.

Yazmin Jauregui
Standing at 5’3″
Fighting at 115 lbs (strawweight)
23-years-old
Fighting out of Tijuana, Baja California, Mexico
Training out of JacksonWink
A pro record of 8-0
6 KO/TKOs

How will Jauregui fare in the UFC:

Jauregui is super exciting and holding six of eight finishes, you don’t see that finish rate in WMMA. Jauregui has a credible ground game but is a super serious striker. Her hands are sharp but it’s her pace and volume that sets her apart. She does a lot of bouncing in and out and fighting in flurries. Jauregui is never throwing single strikes and always throwing in volume. She’s not throwing just in twos but throws multiple strikes at a time. Doing that while also mixing in kicks as well. She really throws everything including the kitchen sink. Sometimes Jauregui can be too press-heavy and sit in the pocket too long. She’s very though and doesn’t mind taking one ton to give multiple strikes.

Jauregui at times is there to be hit but her counter ability is solid. She does get taken down but makes it incredibly hard. She fights wrists well and knows how to use underhooks and circle out. Even when she’s taken down she does the right things to scramble to get back to her feet. Jauregui is a damage-inflicting fighter that will batter you for three rounds or close the show in under five minutes usually. Not just her hands but her heavy leg kicks and her sneaky good head kick. Jauregui when letting those hands go comes from all angles mixing in a variety of combinations. She’s got a lot of qualities that will take her far and at just 23 she’s gonna be a force for years to come.

How will Lucindo fare in the UFC:

Lucindo has been in MMA since she was 14 and at just 20 years old she has a lot of experience already. She has a win over Sarah Frota who is a former UFC fighter which was a huge win for her. She’s won her last seven and her last loss was over three years ago. She has a lot of lesser wins but beating Frota and Lucrezia Ria are good wins.

Lucindo is a jiu-jitsu player and is a judo black belt. Her wrestling is just okay at best. She isn’t a traditional wrestler but will use her judo background to get the fight down. Most of her takedowns are from trips from the bodylock. Her ground game is solid with dominant top position and smooth transitions. Lucindo only has two submissions but does well at actively threatening. In the clinch she’s strong and will oppose her will on you draining your energy.

Lucindo has limited striking. There is some promise with it in the future considering she’s still young but it’s not where it needs to be. Her hands are slow and when she does commit her striking is too wide. She leaves herself open and her hands are too slow when bringing them back to her face. Lucindo tends to let opponents walk her down and set the pace and rely on tying up as they come forward.

I don’t think Lucindo is UFC level now but is talented enough to stick around. I believe she will get better over time and may develop into a top 15 fighter since she is so young and well-tested already.

Women’s prospect fights can be tough to predict but I’m fairly confident in this one. Lucindo is a threat if she can get the takedown but I can’t see her taking Jauregui down. Jauregui has a much superior style on the feet and will chew Lucindo up as long as the fight isn’t grounded. For someone that relies on getting the underhooks, I’m confident that Jauregui can dig her underhooks and stay upright. Even if the fight was to hit the mat it’s not a complete blowout for Lucindo. Jauregui does well on the mat and I think can be competitive enough. It will indeed be a blowout for Jauregui on the feet. I’m picking Jauregui to really get off on her constant pace and pressure. Lucindo is going to let Jauregui come forward and it’s gonna become really difficult for her I predict. 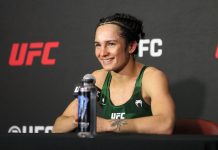