Two top 10 UFC middleweights will collide this December as #4 ranked Derek Brunson faces off with #8 Jack Hermansson on Dec. 3rd at the UFC APEX.

News of the pairing was first reported by Ariel Helwani.

Brunson (23-8) is coming off a knockout loss to Jared Cannonier at UFC 271, in a fight widely derided for its lack of action. Before that loss he was on a five fight win streak looking for a shot at Israel Adesanya. He attempts to land a new one in Las Vegas against Hermansson.

Hermansson (23-7) is coming off a decision win over Chris Curtis in July at UFC London. Although the performance was criticized as safe and even booed by some fans it did earn Hermansson a shot at the #4 ranked middleweight. It’s worth noting that Curtis had stepped into the fight on short notice, after Hermansson’s original opponent, Darren Till, was forced out of the event.

A win over Brunson could bump Hermanson back into the title conversation. He has flirted with the title picture over the past couple of years, only to come up short in fights with Cannonier, Marvin Vettori, and Sean Strickland.

Other fights set for the UFC APEX on Dec. 3rd include: 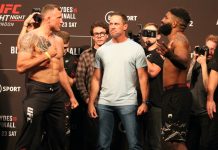