Tamires (6-1), a.k.a. “Tratora,” will face Hong Kong’s Ramona Pascual (6-4) at a UFC Fight Night event on November 5, 2022. MMA Junkie was first to report the news on Thursday; Tamires subsequently confirmed the booking on social media.

Pascual, an Invicta FC alum, has gone 0-2 in the UFC’s featherweight division, and will be dropping to 135 pounds for the fight. She’ll be looking to shake off back-to-back losses against Josiane Nunes and Joselyne Edwards.

The 33-year old from Syndicate MMA had been on a four-fight win streak prior to signing with the UFC earlier this year.

Vidal will enter her octagon debut riding a five-fight win streak. She holds a win over Martina Jindrova, who will fight Kayla Harrison under the PFL banner later this month; the Brazilian’s lone loss came against current UFC fighter Karol Rosa.

The UFC’s November 5, 2022 Fight Night event does not yet have a location, venue, or broadcast plan officially announced. No main event has been revealed for the card, which currently has the following fights reported for it: 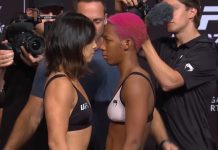 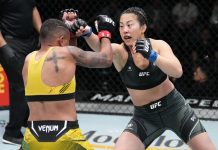 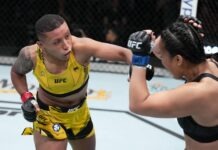