“What I first thought was Tyson’s got a lot of experience. He’s got almost 25 professional fights and even thought he has a lot of losses you can’t discount cage time, experience like that,” Cauley told Cageside Press among other media on Wednesday.

“That can’t be good. I imagine that the time off has rusted him a bit. I’m sure that he’s been training in the meantime. My personal philosophy as a fighter is that guys don’t really get better unless they’re fighting,” Cauley said.

Cauley said he expects to see Jeffries performing similarly than how he did the last time he fought which isn’t really a good thing since he lost that bout via TKO in the first round.

With his fourth fight under the Bellator banner Cauley has gotten more comfortable with everything that goes into fight week.

“Everything from the COVID protocols to the training camps to the nutrition, I’m just getting a little better at it each time. I feel great. I’m just excited to fight.”

Cauley (3-0) last fought back in January where he defeated Ben Parrish via TKO at Bellator 273.

“It’s been a little bit too long since my last fight in my opinion so it’s just really got me chomping at the bit. I don’t know if I’ve ever been this excited to hurt somebody,” Cauley said.

With two straight fights in his hometown of Phoenix, AZ, Cauley now gets back on the road but he is not completely alone. The pressure doesn’t change much from a home fight to a road fight for Cauley.

“It’s all pressure. Each one of these pro fights means a lot. Maybe it’s a little bit more pressure in front of the home crowd, but I have a lot of friends and family coming,” he said.

“I just don’t think about it. I don’t feel like it adds that much pressure to me. Losing is not an option in any of these fights.” 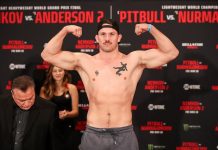 Bellator 284: Marcos Breno Happy to Be Part of “Special Group” of Fighters at Teixeira MMA