ONE Championship’s heavyweight title picture is about to get a little less murky.

After an extended absence in part due to a contract dispute, ONE heavyweight champion Arjan Bhullar (11-1) is due to return to action this September. At ONE 161 on September 29, he’ll face interim champ Anatoly Malykhin (11-0) in a title unification bout.

ONE Championship officials announced the news on Thursday.

🚨 BREAKING 🚨 @TheOneASB and @AnatolyMalykhin go to war on September 29 to unify the ONE Heavyweight World Title! Who will leave ONE 161 as the undisputed divisional king? 👑#ONE161 | Sept 29 | #ONEChampionship pic.twitter.com/n5MCeG1xy5

Bhullar, a former UFC standout, joined ONE in 2019 after exiting his old promotion to test the free agent waters. He immediately made an impact, defeating Mauro Cerilli in October of that year at ONE’s massive Century event. With the coronavirus pandemic slowing things to a crawl, however, Bhullar did not return to action until last April, defeating Brandon Vera via second-round TKO to become the new ONE heavyweight world champion.

In over a year since, Bhullar has yet to defend his title. The Indo-Canadian sits on a four fight win streak dating back to his UFC run, however.

Malykhin defeated Kirill Grishenko back in February to claim interim gold. Perfect as a professional through eleven fights, Malykhin has won all three of his contests under the ONE Championship banner thus far.

ONE 161 takes place on September 29, 2022 in Singapore, at the Singapore Indoor Stadium. The following fights have been reported for the event: 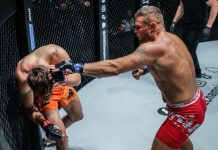