Las Vegas, NV — Juliana Miller will be learning on the job during her UFC career, and she is a little bit worried.

Miller (3-1) became season 30’s Ultimate Fighter at UFC Vegas 59 when she finished fellow finalist Brogan Walker in the third round with elbows.

Miller was the youngest fighter on season 30 of The Ultimate Fighter, but she really stood out with an outgoing and wild personality. While she has an entertaining personality that will either rub fans the wrong way or make her a fan favorite, she lacks experience.

“Killer” Miller has been fighting since 2017, going undefeated as an amateur; however, she only has four professional fights. (Technically, she has six if you count her fights on the show, but they are unfortunately considered exhibition fights).

The 26-year-old honestly admitted that she is scared to fight in the UFC with her lack of experience.

“Um, if I’m being completely honest, yeah, I’m kind of terrified,” Miller told Cageside Press during her UFC Vegas 59 post-fight interview. “A lot of people had the opportunity to start slow and build up their fights in lower levels. And a lot of girls come in here 5, 6, 7-0, and I’m not. I’m now 3-1. I know it said I was three and one on my way out there, but actually, on my professional paper, it’s 2-1; now I’ve earned my 3-1.”

“So it is a little nerve-wracking. But to be quite honest with you, the fans, more than your record, they care about your showmanship and your personality. So I know as long as I step in that cage, and I put on a show, I ain’t going nowhere. So, yeah, it is a little nerve-racking, but I’m happy to finally have a platform to speak my voice, and you know, love me or hate me, there’s been a lot of eyes.” 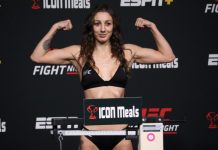