Las Vegas, NV — Chris Duncan took the long way to the UFC in a sense, after seeing one fight fall through on the Contender Series last year, then losing another.

Despite that, he has no regrets after winning his way into the UFC on Tuesday night, in his second appearance on Dana White’s Contender Series.

Duncan’s knockout of Charlie Campbell had him certain he’d done enough to finally secure a UFC deal. That, on a night where all five winners made the big show.

“I definitely thought like, I bounced his head off the canvas, you know, like, one of the speed balls was like ‘boom!'” Duncan (9-1) told media outlets including Cageside Press following the event. “Putting somebody out like that, it’s never nice. But that‘s what I’m built for. And, you know, I knew that was going to secure me my contract.”

Duncan recognized that circumstances might be in his favor, after cutting weight three times in Las Vegas last year.

“My opponent pulled out on the Monday after I made weight,” Duncan recalled, referencing his DWCS match-up with Manuel Gaxhja last season. Gaxhja had fallen ill after a weight cut gone wrong. “And then Sean [Shelby, UFC matchmaker] said, ‘we’re going to try and get you on Saturday. So we’re gonna send you to the UFC. And we’re going to give you a shot.'”

Duncan had no idea who he’d be fighting; it turned out that Jim Miller was the name the UFC had in mind. “But they said that the Commission couldn’t allow that. Because, obviously, he’s had so many fights and I have not had a lot. But when I was in that moment, all I wanted to do is be a part of the UFC.” At that point, Duncan’s manager told him to pack his bags and get ready to head home, not expecting a fight. “So as you do, you go to In-N-Out burger and eat some fries and burgers. And then I got a call the next day, thinking it was going to be for a flight. And sure enough, my manager said, ‘you know, we’ve got you a fight.'”

While Duncan said yes to that next Contender Series fight, against Viacheslav Borshchev, “the weight cuts took a lot out of me. And I didn’t feel myself. I feel like it was a dream to be honest. Like I don’t even like— coming back here, obviously a year [later] can feel like a little bit deja vu, but I wasn’t right mentally. And I was right mentally tonight.”

“In the end we got it done, and now we’re part of the UFC, so happy days.”

“That was like the best thing that ever happened to me,” he admitted. “Because I feel when I used to go into fights, I used to go kill, kill, kill, kill mode, you know? I used to, like, get the blinders on and go forward and try and knock them out. And that’s not the way you go. And especially in MMA, because there’s so many ways to win and lose and then obviously, I paid for it. I got left hooked, and I got knocked out. So I had to go back and I had to think about my mindset and the way I gear up for a fight.” 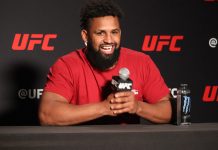 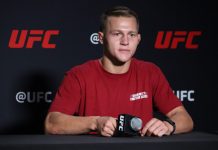 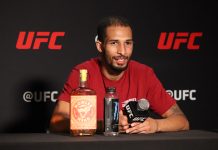