Dallas, TX – Ahead of UFC 277, Matthew Semelsberger — a.k.a. “Semi the Jedi” — told us that Alex Morono represented the “next great challenge” for his career.

As the featured preliminary bout at the American Airlines Center on Saturday, plenty of eyeballs would be watching to see if Semelsberger was ready for that next step.

Morono and Semelsberger started the night on three and two-fight win streaks, respectively.

Round one Morono came out with a plan as he began to implement a plan to use the jab and movement to land rights. Throughout the whole first round Alex kept using the same type of attack to land right hands to the point that Semelsberger’s left eye swelled up badly. Semelsberger began the fight a bit reckless ducking and throwing overhands until Morono’s jab game put a stop to it.

Round two Semelsberger came out aggressive looking to put Morono on the back foot, but his opponents game plan quickly ended that rush. Semeslberger’s left eye was clearly compromised as Morono landed what seemed to be any and every right hand he wanted. Later in the round a clinch situation ended up on the ground with Semelsberger on top as he landed heavy right elbows to end the round. Easily the biggest moment for Semelsberger up to this point.

Round three Semeslberger came out on fire and landed a jump knee that put Morono in trouble. Semelsberger threw every strike in his arsenal to try and end the fight, but slowed when they clinched on the fence. Even though Semelsberger’s corner yelled and begged for him to let Morono go to finish him he was unable to. Morono finally recovered and continued his game plan of stick-and-move the rest of the fight. 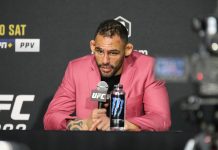 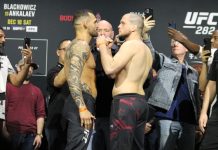 UFC 282: Santiago Ponzinibbio Puts Away Alex Morono in Third Round of Back-and-Forth Affair 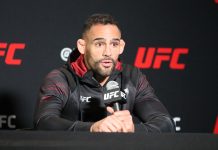