The highly anticipated return of Dana White’s Contender Series arrived on Tuesday, with fighters as always vying for a UFC contract in the ultimate MMA proving ground.

What should have been a five-fight card, however, was truncated thanks to one fighter missing weight by a wide margin Monday morning. Brazilian Willian Souza, set to face Farid Basharat, essentially weighed in for the wrong weight class, hitting the scales at 146 pounds for a bantamweight fight.

Basharat, whose brother Javid won his way into the UFC on Dana White’s Contender Series last year, successfully made weight at 136 pounds. That led the Nevada Athletic Commission to wave off the fight, as such seismic weight discrepancies are not allowed under the commission’s rules.

Dana White’s Contender Series Season 6, Week 1 kicks off at 8PM ET, airing live on ESPN+ in the United States, and on UFC Fight Pass elsewhere. Full results from the card, at the UFC Apex, can be found below.

Kicking off the night, a couple of fouls slowed the opening round of Alessandro Costa vs. Andres Luna Martinetti at flyweight, with both an eye poke and low blow halting the action. Luna opened the second with a high kick, and utilized kicks high and low throughout the round. Costa was loading up on his punches, and would add his own head kick attempt with two minutes left in the frame. Towards the end of the second, Luna feigned being hurt, trying to lure Costa in in comical fashion. Moments later, he was hurt for real, dropped care of a heavy right hand, but managed to reverse while on the ground. Luna, who found success with his jab in the second, was tagged again early in the third, but not dropped. Still, that right hand from Costa felt laser-guided, and he’d come away with the split decision win.

In the second fight of the night, Dennis Buzukja and Kaleio Romero squared off. Both fighters exchanged heavy kicks in the opening 30 seconds. Buzukja showed off his renowned striking while Romero relied on his superior wrestling. Romero used the entire first round to try and take Buzukja down but could not do it. The calf kick was a weapon for Romero in round two, and then he got back to clinching Buzukja against the cage. Buzukja eventually got off the fence and hurt Romero, causing him to panic-wrestle. Buzukja landed a takedown in round three; Romero looked very tired. Romero looked like he was trying for a twister but Buzukja defended. Buzukja pulled off the unanimous decision.

Fight three saw light heavyweights Anton Turkalj and Acácio dos Santos get right after it. Dos Santos cracked Turkalj and fired back with a high kick, then started grappling with his opponent. Most of the first round was Turkalj trying to sneak in a rear-naked choke and controlling Dos Santos. The second round saw both fighters landed heavy combos, after which Turkalj landed a slam takedown on Dos Santos. When they got back to their feet, Dos Santos started landing the better punches, and Turkalj attempted a flying knee. The third round started fast like the first two but it eventually ended up with Turkalj just grappling Dos Santos en route to a decision win.

A big takedown from Pyfer opened up the featured fight on Tuesday. He threatened with an arm-triangle choke that looked tight, but Diaz turned away, rolled, and survived — with Ozzy later reversing the position. They’d end the first back on the feet, Diaz pressing.

In round two, Joseph Pyfer earning himself a UFC contract. A huge shot dropped Diaz, a counter-left to the chin. A bit of follow-up, and that was it. “Thank you for the f*cking opportunity,” Pyfer told Dana White from the cage. 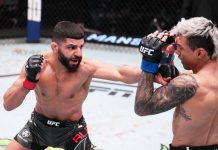 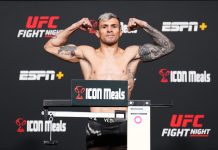 Welcome to the UFC: Alessandro Costa