KSW 72 went down live on Saturday, July 23 at the outdoor venue of the Amfiteatr Kadzielnia in Kielce, Poland.

Topping the event, welterweights Tomasz Romanowski (15-8) and Andrzej Grzebyk (18-5) threw down, with Romanowski looking to build on a two-fight win streak. Grzebyk, meanwhile, was hoping for a return to the win column after coming up short against Adrian Bartosiński earlier this year.

In the evening’s co-main event, undefeated featherweight prospect Dawid Smielowski (9-0) faced off with another up-and-comer out of Poland, Patryk Kaczymarczyk (8-1).

Brian Hooi (17-8) of the Netherlands also made his KSW debut earlier on the card, against Michal Pietrzak (10-5-1). Hooi would look to follow up on the success of fellow Dutch star Reinier De Ridder, who one day earlier under the ONE Championship banner had pulled off an impressive submission win.

KSW 72 takes place on Saturday, July 22, 2022 at the Amfiteatr Kadzielnia in Kielce, Poland. The action gets underway at 1PM ET, with a live stream available via KSWTV.com. Full results from the event can be found below. 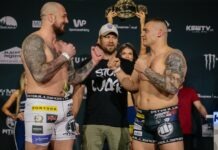