Invicta FC was in Denver, Colorado on Wednesday night, with Invicta FC 48 a rare road show for the all-female fighting promotion.

Also in action on Wednesday night, Bellator MMA veteran Kristina “Warhorse” Williams, who went 3-3 in Bellator from 2017 to 2020. Williams was in search of her third consecutive win, and second inside the Invicta cage, when she took on Liana Pirosin of Brazil.

Invicta FC 48 goes down live on Wednesday, July 20, 2022 at ReelWorks Denver in Denver, Colorado. Open scoring will be in effect. The event will be broadcast on AXS TV in the U.S., Fight Network in Canada, and on Invicta’s Youtube channel and Facebook page.

A live stream of the action can be found below, along with full results. 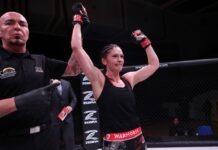