Dustin Stoltzfus and Dwight Grant were both looking to snap precarious losing streaks on the UFC Long Island preliminary card on Saturday.

Stoltzfus had lost three straight, Grant three of his last four. A dangerous position for either middleweight to be in.

Round two started with Grant eating a leg kick and a hook a few seconds later. Stoltzfus went high with a kick and ate another counter punch. Grant landed a jumping kick on Stoltzfus’ body. Not a lot happened for a minute and a half, but Stoltzfus kept walking Grant down. Stoltzfus shot for a takedown with a little under two minutes left in the round, but Grant defended it. Stoltzfus put Grant against the fence in a clinch and eventually completed the takedown. Stoltzfus jumped on Grant’s back and flattened him out. The rounded ended with Stoltzfus landing ground and pound.

Round three started with a punch from a Grant. A few more punches from Grant followed but nothing significant. four minutes left, and Grant landed a counter left. 3:20 left, and Grant threw a couple of punches that landed. Stoltzfus landed a punch of his own that got Grant off balance. A spinning hook from Stoltzfus missed. Stoltzfus shot for a takedown, got his hands locked, and slammed Grant in the center of the octagon. With less than ten seconds left in the fight, Stoltzfus mounted Grant and dropped some ground and pound.

In the end, Stoltzfus took in on the scorecards. He snapped his three-fight losing streak and saved his job with the win, while Grant finds himself in the exact spot his opponent just got out of. 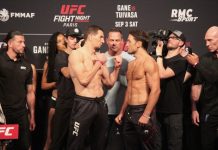 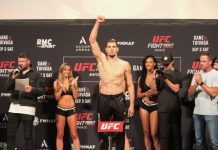 Welcome to the UFC: Abusupiyan Magomedov