“I feel that (my performance) was good. The whole camp we were building it based upon wrestling because we knew my opponent was a very fast starter. Very dangerous guy, and a stand up guy, very good striker. We all wanted to gas him out, use our takedowns, chain wrestle with our striking and get the finish,” Nzechukwu told Cageside Press among other media at his post-fight scrum.

Nzechukwu isn’t known as the fastest starter in the UFC. In this fight he took very little time to wait and went after Roberson when the fight started.

“I’m always a fast starter in the gym, but no one cares what you are in the gym. What you want to see is what you are under the lights. So I’m always in my own head thinking and I’m hesitant every I step in the cage. My coach was like, ‘Start quick, start quick, start quick! And finish fast!’ He knows my pace and if I can keep that same pace they won’t be able to keep it and I can overwhelm them,” Nzechukwu said.

“So I start quick and I got the finish, Thank God.”

Nzechukwu came into Saturday’s fight looking for the first submission victory of his career, but Roberson proved tough to finish with a choke.

“I got it a lot of time in training camp, and I thought I would get it again. I was looking for it so much I forgot to ground and pound until the third round. My coach was like ‘Just ground and pound, elbow!’ and I said oh yeah,” Nzechukwu said with a smile.

“I went and used the elbows a couple times and the fight was over.”

What’s next for the “African Savage”?

“As soon as my coach gives me the green light. We’re going to go back, we’re going to see what I did great and the things I didn’t do as great. I trust him. I’ve been with him over so many years. I’m just going to trust his judgement,” Nzechukwu said.

Watch the full UFC Vegas 58 post-fight press appearance from Kennedy Nzechukwu above. More coverage from the event can be found below. 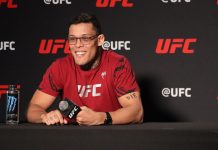