The fight sees Nunes looking to snap a two-fight skid, including her first fight back from giving birth to daughter Raegan Ann with former UFC women’s bantamweight champ Amanda Nunes. With the chaos that comes with a newborn, it would be easy to see the baby as taking away from that performance, but there was more to it than that, Nunes said during Thursday’s UFC Vegas 58 media day.

“I thrive under chaos, so it wasn’t so much the chaos of the baby. It was physically— I had a really bad delivery. Right after Raegan was born, I was in the hospital two times with in the first two months with infections,” Nunes (10-7) revealed. Admitting that she should have taken more time off, she continued by saying “So those were pretty bad. Right before my fight with Mackenzie [Dern], I had a stent put in because I was having kidney stones. The week of my fight I had to pass a kidney stone, so I was on medication. But you have that in your head, where it’s just like ‘no these are the obstacles you have to go through, and it’s all going to work out.’ But that’s not the case all the time.”

Nunes admits that she fell on her face in the Dern fight, with “Mackenzie on a rip at the time,” and believes taking the fight was a horrible decision on her part. Then there was sitting on the sidelines, watching with Amanda Nunes do everything she was doing as champ. “I had to take my head out of all that kind of stuff. Now, I’ve got to be good, I’ve got to be healthy, I’ve got to be happy — and that’s where I am now, so I’m excited.”

Nunes now returns against Calvillo, another strawweight ex-pat. But for Nunes, at least, there’s no going back to 115 pounds. An attempt in December, which led to her being removed from a fight with Amanda Lemos, closed that door.

While not fighting, Nunes has been seen of late on The Ultimate Fighter 30, coaching next to wife Amanda and opposite Julianna Pena. While she’s looked good on the show, Nunes now questions whether she wants a coaching career — though it’s not directly a result of her time on TUF.

“I used to want to be a coach. I did. Me and Amanda’s dream was to open a gym, mainly targeted towards female fighters,” Nunes revealed. “After being a coach on the show, I’m not sure if I want to do it. Not so much because of all the work that’s put into it, but I feel like the past 15, 20 years that I’ve been fighting, and Amanda, we’re a bit burned out from that scene, and we haven’t yet been able to enjoy all the things that we’ve accomplished over the years.”

Nunes has dreams of travel, and showing her daughter the world. “I want to give her a great life, I want more kids, and I know to be coach is a 100 percent thing,” she continued. “I’m not gonna half-ass it, if I were to be a coach, it would be something that I committed to a hundred percent, and I’m just not sure I want to do that not knowing I was a hundred percent. ”

Nunes added that while it’s not commonly known, she has been her wife’s coach for the past 10 years. “I do know what I’m talking about at the highest level, and I love to give any girls I train with advice, not just on what it’s like fighting technically but just the sport in general, from a business standpoint or the future of what the sport can bring financially, I feel a lot of people struggle with that.”

If she gets the itch after a bit of a break, however, Nunes is leaving the door open. “If I get the itch I’ll step in there and, maybe, give some coaching.”

Watch the full UFC Vegas 58 media day appearance by Nina Nunes above. The event takes place this Saturday, July 9, 2022 at the Apex in Las Vegas. 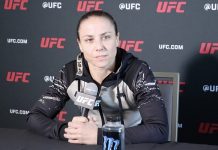