Las Vegas, NV — Dricus Du Plessis has had quite the road getting to UFC 276, which arrives this Saturday at the T-Mobile Arena in Las Vegas.

“I felt ready to fight the number one in the world for April 9. I was ready to fight anybody,” Du Plesis told media outlets including Cageside Press during Wednesday’s UFC 276 media day.

First up was Chris Curtis. Then came Anthony Hernandez. He was then briefly linked to a fight with TUF winner Kelvin Gastelum, only for that to fall apart during fight week.

“That opportunity [to face Gastelum] came, and I was immediately ready for it. And of course, the big up, and then the big down. That’s the name in the game in MMA I guess,” continued Du Plessis, who admitted that the experience was frustrating.

“It was frustrating in the sense that I was so ready to go out and perform. It wasn’t the fact that I would have been #8, which was obviously a great jump for me. It was the fact that I felt so ready to go out and perform, and I was in great shape, all the hard work [done], already started cutting weight. If you get your fight cancelled four weeks, or three weeks, or two weeks out, that’s one thing, but on Fight Week, it stings a little. But I had my two days of sulking, and I had to get over it.”

Once he was over the Gastelum cancellation, the match-up with #12-ranked Brad Tavares arrived. Du Plessis certainly doesn’t see it as a shortcut to the top 15.

“I think they are really not doing me any favors getting into the top 15. He’s an incredibly tough opponent. I think he’s always been game, he always comes to fight, he’s always in shape,” the South African said when asked about Tavares. “You don’t see this guy gassing out in a fight because he didn’t prepare. You don’t see this guy going away— I mean he fought Yoel Romero, he stayed competitive until the end. He got beat pretty badly by the champ, but it wasn’t like he just shelled up. He tried to get that fight, he tried to get the champ out of there. But he’s not fighting one of those guys, he’s fighting me.

“He’s an incredible fighter, I think he always had been, but I do think he’s never quite progressed. If you look at his age, if you look at all of his fights, if you look at from day one to now, not a lot of change happening in his style. He’s not going to shoot for the takedown, is he? No. He’s not gonna start to strike more strategically, no, he’s going to come out there and bang, his traditional Muay Thai style, trying to throw the heavy legs kicks. That’s what he’s gonna do. He’s always fought like that, and [sometimes] it’s worked for him, and [sometimes] it hasn’t worked for him. But that’s the way he fights, he’s not going to change any time soon.”

Du Plessis went on to add “respect to him, he’s a really really tough fighter and a great gatekeeper, but there’s a new generation coming through.”

In this outing, Dricus Du Plessis is on the undercard of Israel Adesanya, who in addition to fighting out of New Zealand has represented Nigeria, and helped make the idea of a UFC Africa event a plausible one. Seeing that can be motivating, but for Du Plessis, it’s all about his performance in the end.

“For me, my fight got moved up to the prelims if I’m not mistaken, and that’s great. It sucks that I have to celebrate being on the prelims, but I said this for the first fight; my first fight was on the main card, but it was a much smaller card. Second fight, prelims, great, Conor McGregor-[Dustin] Poirier 3, and here I come, massive fight card, early prelims, enjoy that. And I was like ‘well if I get another knockout will they put me on a pre-prelim fight?'” Du Plessis quipped. “But well, moved up to the prelims. If they want to keep me there, go for it. I’m getting the exposure I need. Fighting on the big cards is what I want, and I’m just going to keep on performing. At the end of the day, that performance is going to get me to the main card. I don’t know what else I can do, but I’ll just keep on performing. That’s my job, to get in there, fight, get a performance, and perform the way I know I can and like I have been doing.” 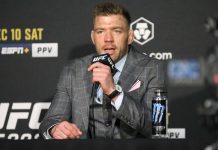