Kayla Harrison heard the complaints when Julia Budd dropped out of their women’s lightweight main event at PFL 6 this week.

Harison will instead face Kaitlin Young, but there was something of an outcry from fans on social media— who for some reason placed the blame on Harrison. The fighter who remained in the fight.

That led to Harrison clapping back, which she also caught some flak for.

“Y’all act like I’m the one who pulled out of the fight. Best wishes to Budd on a speedy recovery,” she posted in a brief message on Twitter. Cue complaints.

“At this point, I get backlash for how I brush my hair. Everyone has an opinion— there’s just a lot of negativity in this world, that’s all I’m going to say,” Harrison (13-0) said during Wednesday’s PFL 6 media day.

That was not literally all the two-time Olympic gold medallist had to say, however, as she would go on to express her frustration with that negativity. “Sometimes I lose the ability to block it out, and I find the urge to snap back. That was just me telling them ‘shut the hell up, I didn’t pull out of the fight, I’m not going to pull out of a fight.’ It is what it is.”

“It just gets frustrating, it’s the same thing over and over again. People just make assumptions, or they don’t read anything, and just want to talk trash,” Harrison continued. “It gets a little bit frustrating. I’m here, I’m going to fight, I’m going to fight whoever they put in front of me. I can only control the controllable. I can only control me, and my reaction to things.”

With all that in mind, it would seem Harrison has a small amount of regret even responding to her critics. “That’s on me, I shouldn’t have said anything, it’s just a bunch of negative people making noise. I’m excited to fight, I’m excited to fight Kaitlin Young, July 1, it’s going to be a good fight, and that’s all there is to it.”

When it comes to Young, Harrison recognizes her as a pioneer in the sport of mixed martial arts. “I think she’s just a veteran of the sport. She’s tough, she’s gritty, she’s composed, and I’m looking forward to sharing the cage with her. She’s a pioneer of the sport, she’s like I said, she’s a veteran. I have a lot of respect for her, and we’re going to put on a hell of a show.”

It’s not Young, but Larissa Pacheco, however, who Harrison picked as the toughest challenge in the tournament this year.

Watch the full PFL 6 media day appearance from Kayla Harrison above. The event takes place this Friday, June 1, 2022 at the Overtime Elite Arena in Atlanta, GA. 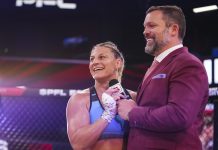