Las Vegas, NV — Thiago Moises knows who he wants for his next outing.

Brazil’s Moises (16-6) picked up a big win at UFC Vegas 57, snapping the first two-fight losing streak of his career. He submitted Christos Giagos in just three minutes to remind everyone that he is someone to watch.

Immediately after his fight, Moises was extremely emotional. He explained why in his post-fight interview.

“I screamed, and I cried. I was so emotional because I was coming from two losses in a row. You know, it was very hard, was a very difficult moment in my life, but I kept working,” Moises told Cageside Press in his post-fight interview, back stage at the UFC Apex. “And when I was walking through the cave, the song that I chose, this guy was saying, that he left his school, to just keep working and play music. I did the same, you know, I left school to play sports, to train jiu-jitsu, or to train striking.”

“I was so tired during school, in the beginning, I couldn’t study. So I sacrificed my whole life to this moment. Also, coming from two losses, that’s why this was so important to me.”

Moises asked for a fight with Joe Solecki during his in-cage interview with Michael Bisping on Saturday. “Joe Solecki, I want to fight you next, man,” he called out on the mic. “Don’t hide.”

The Brazilian later expanded on his callout.

“We are both young guys and are both coming up. And also, I think that the winner of that fight could get a top 15 spot,” Moises said.

The 27-year-old wants to return to action as quickly as possible, and with Solecki coming off a win a few weeks ago, their timetables line up almost perfectly.

Watch the rest of Thiago Moises’ UFC Vegas 57 post-fight interview above. More coverage from the event can be found below. 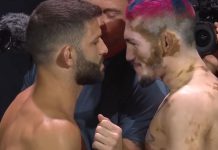 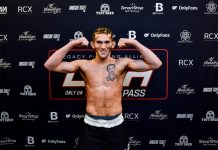 Dropping Off UFC 283 Never an Option For Thiago Moises