In a rare battle of ranked up-and-comers, Arman Tsarukyan and Mateusz Gamrot will battle to take a big step up in the UFC’s crowded lightweight division at UFC Vegas 57.

If you follow the sport of mixed martial arts carefully, you’ll notice Saturday’s main event is a rare occurrence.  Usually, up-and-comers are matched with a recognizable veteran in what is frequently billed as a potential changing of the guard type of pairing.  When two contenders are on the rise at the same time, such as Israel Adesanya and Paulo Costa for example, a fight is usually not made until one or both are at the championship level so that the bout is an even bigger event.  Rarely are two surging prospects paired up, with the logic being that a promotion would potentially lose out on having two potential stars at the cost of elevating just one.

Arman Tsarukyan will have the opportunity to show that he is the one to take the next step as he pursues his sixth victory in a row.  The Armenian product rose to prominence primarily in Russia’s Modern Fight Pancration promotion where he became lightweight champion in 2017.  Along the way, he avenged one of the two losses of his career in coming back to stop Alexander Belikh after dropping the second professional fight of his career to him back in 2015.  After stringing together a 13-1 record, he was signed to the UFC.

“Ahalkalakets” dropped his promotional debut to rising contender Islam Makhachev, but went on to reel off five straight victories inside the Octagon against veterans Olivier Aubin-Mercier, Matt Frevola, Davi Ramos, Christos Giagos, and Joel Alvarez.  While the 25 year-old has shown impressive maturity against his older opponents, he has recently begun to score those coveted style points with the fans as he recorded finishes by strikes in his last two fights.

Poland’s Mateusz Gamrot is looking to show that he is the next great contender from his home country who can break into the title picture as he enters his first UFC headliner with an impressive 20-1 record.  The 31 year-old gained recognition in Poland as a two-division champion in KSW where he went 17-0.  His only blemish, if you could call it that, was a No Contest with The Ultimate Fighter winner Norman Parke in 2017 whom he had previously defeated earlier that year and would go on to defeat again in his penultimate fight before joining the UFC in 2020.

Though he has not had the same amount of UFC experience as Tsarukyan with only four fights in the Octagon, “Gamer” has made his appearances count.  After dropping a competitive split-decision to Guram Kutateladze in his promotional debut, Gamrot went on to record consecutive finishes over Scott Holtzmann, Jeremy Stephens, and Diego Ferreira to announce himself as one of the latest sharks in the eternally competitive tank of the lightweight division.

When surveying the lightweight division, any number of match-ups are available for both Tsarukyan and Gamrot as they would conceivably be competing for a place in the top ten.  Assuming the UFC is looking to propel them into the title picture as a breath of fresh air, then names like Rafael dos Anjos, Tony Ferguson, and Michael Chandler stand out as potential opponents.  If the UFC has other plans for their more established stars, then another battle with a rising contender may be in the cards with a fight against  Kyrgyzstan’s Rafael Fiziev potentially coming next. 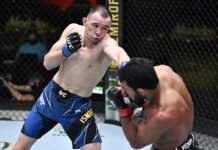 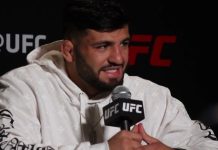