Home Interviews UFC Vegas 57’s Mario Bautista Expects War with Kelleher
Share on Facebook
Tweet on Twitter
When the fight announcement of Mario Bautista and Brian Kelleher came through, fans rejoiced. Not only does Mario Bautista bring a style that excites fans, but Kelleher’s name has become synonymous with excitement. Bautista himself recognized that fact recently and looks forward to what that means in the cage. With Kelleher having dropped his last fight, he thinks the bantamweight is going to be even more eager.
“I think he’s going to come after it. Coming off his last loss, he’s going to get after it,” he said. “I’m going to meet him right there in the middle. It could be a quick night or a potential fight of the night.”
Even though Bautista is a well-versed wrestler with a slew of training partners that come from the highest level of the discipline, he isn’t planning on pulling this fight onto the mat. However, that doesn’t mean he thinks his opponent won’t try either.
“I’m always going to be looking for any kind of finish, but in this fight, I think he might try to engage in the wrestling,” he said. “I’m ready for that. I love to wrestle, strike – whatever you want to do.”
Whatever the type of fight that comes to him this weekend, he’ll have his eye on the bonus. The fact that every finisher on the last two cards has gotten a bonus isn’t lost on him.
“These guys, especially the last card, have been setting the standard,” Bautista said. “So I’m hoping this Saturday, man, hopefully I can keep up with them and that standard because apparently those finishes are getting bonuses. And that’s just my style anyways.”
Bautista’s fight will take place on the ESPN+ prelims this weekend at UFC Vegas 57.
You can hear the entire audio of this interview at 23:23.
TopTurtleMMA · Episode 331: Vanessa Demopoulos, Mario Bautista, and UFC Vegas 57 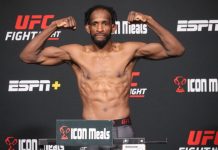 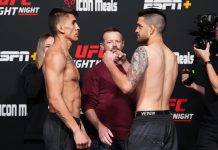