Friday’s PFL 5 in Atlanta has undergone a number of changes.

With UFC alum Boston Salmon out of his featherweight fight against Brendan Loughnane, Bosnian Ago Huskic (8-4) has stepped up to take his place. Additionally, three fighters have been lost on the heavyweight side, resulting in three new fighters stepping in.

The fighters lost are Ali Isaev (due to visa issues), Jamelle Jones, and Stuart Austin (the latter two due to injuries). Taking their place will be some familiar names: Juan Adams, Maurice Green, and Shelton Graves.

Adams and Greene both previously competed for the UFC. Adams had recently revealed that he had signed on as an alternate for the PFL. Now, he’s getting a chance to step up and fight.

With a 9-4 record, Jackson-Wink’s Adams will face another league newcomer, Sam Kei (8-5). Kei missed his first fight of the season due to visa issues of his own, and was originally slated to fight Denis Goltsov this Friday.

Instead, Goltsov, a 2021 heavyweight semifinalist, will face Greene (10-6), who UFC fans will remember from The Ultimate Fighter 28. “The Crochet Boss” went 4-4 with the UFC before being released, but recently bounced back with a submission win at CES 68 in May.

Renan Ferreira, Denis Goltsov, and Bruno Cappelozza all have six points in the heavyweight division, while Delija has five. For any of the newcomers to make the post-season, they’ll need a quick finish — and they’ll have to hope that at least some of the division leaders are upset on Friday.

The changes don’t stop there. 2022 Challenger Series winner Reinaldo Ekson (17-5) replaces the injured Saba Bolaghi against standout wrestler Bubba Jenkins. Jenkins made it to the featherweight semifinals in 2021.

Taking place at the Overtime Elite Arena in Atlanta, GA on Friday, June 24, the full PFL 5 card currently breaks down as follows: 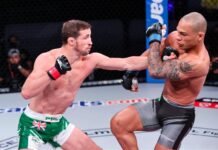