A former Jungle Fights champion out of action since 2019, Natalia Silva nevertheless made her UFC debut on Saturday, taking on Jasmine Jasudavicius in a flyweight bout on the UFC Austin prelims.

The tall, rangy Jasudavicius was a tough out for a first fight in the promotion, despite entering just her second bout inside the octagon. Her first had come in a win over Kay Hansen earlier in the year.

That said, Silva impressed in her debut, surprising pretty much everyone, most of all Jasudavicius.

Silva started the fight by throwing a series of kicks. She did stumble Jasudavicius with a flurry of punches forcing her to tie up. Nothing came from it and Silva eventually broke free. Silva was a lot quicker and was catching Jasudavicius coming forward. Nothing big landed but Silva was staying busy just making it difficult for Jasudavicius. Jasudavicius clinched up with Silva again and didn’t get it down, but did hold Silva against the cage to the end of the round.

Jasudavicius didn’t look good early in round two, just walking into strikes. She put Silva against the cage but it was Silva who got the takedown. Jasudavicius got back up quickly but Silva was where she wanted to be. Silva was back to landing at will forcing Jasudavicius to shoot. Silva defended by getting on top and smashing Jasudavicius with elbows. In the last minute Silva held Jasudavicius on the outside with a lot of kicks landing from all kinds of angles.

In the final round in dire need of a finish, Jasudavicius pressed forward. Silva was using her lateral footwork and using kicks. Jasudavicius shot in for a takedown and looked as if she was going to complete it, but Silva defended perfectly. The rest of the round was Jasudavicius going forward but paying for it as Silva’s footwork and striking/kickboxing were superior. Jasudavicius leapt forward with a wild attempt to land a knockout blow at the end of the fight, but the story was all Silva. 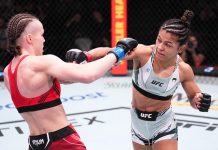