After suffering back-to-back losses as a bantamweight, Brazil’s Joselyne Edwards opted to give featherweight a try at UFC 275, where she opened up the card against Ramona Pascual.

An Invicta FC alum, Hong Kong’s Pascual had made her debut earlier this year but was out-classed by Josiane Nunes.

With no touch of the gloves, the fighters took the center of the octagon, followed by a low kick from Pascual to start the fight. Edwards landed a couple of low kicks as well. A few push kicks from Edwards, and then she landed a nice combo. Another push kick and 1-2 from Edwards but nothing landed. Pascual shot in and put Edwards against the fence, but Edwards escaped after landing a punch. Two minutes were left in the fight, and both fighters exchanged low kicks. Pascual caught Edwards’ kick and landed a punch. Just over a minute left, and Pascual caught a kick and put Edwards against the fence. With 45 seconds left, Pascual landed a knee that hurt Edwards! Pascual started teeing off on Edwards, which forced Edwards to shoot. The round ended with Pascual landing a head kick.

Round two started with both featherweight fighters exchanging kicks. Pascual shot for a takedown, but Edwards reversed it. They broke and got back to the middle. Just over three minutes to go in the round, and Pascual landed a left hand that got Edwards’ attention. Near the midway mark, Pascual shot for a takedown but nothing came of it. Edwards continued landing push kicks and low kicks. The round ended with Pascual landing a takedown. A very uneventful round.

How do you have it scored through 2? 🧐

Edwards may have started slow, but she came back to take a unanimous decision win in the end. 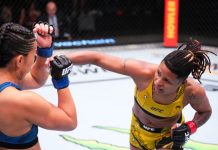